As I mentioned, I am trying to move my IoT development stuff to ESP32, and notably move from Arduino IDE to the native Espressif ESP32-IDF using mostly C.

This poses a slight problem. The development environments are sufficiently different that it is something of a pain in the arse to maintain both. Probably just about possible, but not simple. So I'd like to basically abandon the ESP8266 / Arduino stuff (I'll leave on GitHub) and start working only on the ESP32 based stuff. 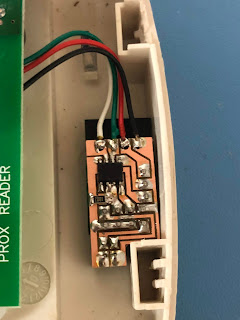 This poses a slight snag as one of the use cases for this IoT stuff is a very small device placed inside a Honywell Galaxy alarm system keypad.

This is based on an ESP-01 module which is ESP8266 based. It is not ideal as not CE marked, no RF can, very limited IO pins, but it is small. It comes with a 2x4 0.1" pitch header and is just the right size to fit a Pololu 3V3 regulator between it and the PCB, which is rather neat.

This use case has the ESP-01, a 3V3 regulator, an RS485 SO8 driver, and a small 2x2 milli-grid header for programming and debugging.

The whole thing fits in the small space inside the keypad, as per the picture on the right.

As a result I assumed I'd be stuck with, at the very least, my keypad code on the ESP8266 / Arduino based code.

The other IoT devices are generally based on either ESP-12F, or preferably ESP-12S modules. These are only slightly narrower than the ESP32-WROOM-32 modules I am now using, and so easy enough to make alternative designs using the ESP32.

The ESP32, however, whilst larger, has a lot of IO pins. It is possible to track these pins so that you have quite a few usable IO pins, and GND and 3V3, all on one end of the chip if you try :- 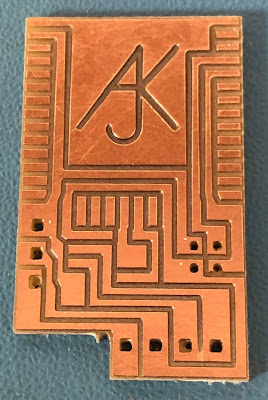 I have actually tracked Tx/Rx programming pins, and GND and 3V3 "through" some unused GPIO pins, which allows its all to come out of the bottom end and keep the whole thing quite narrow. Obviously this is fine as long as I don't make those pins an output :-)

Once again, the new milling machine is doing a great job, and I was able to solder it. 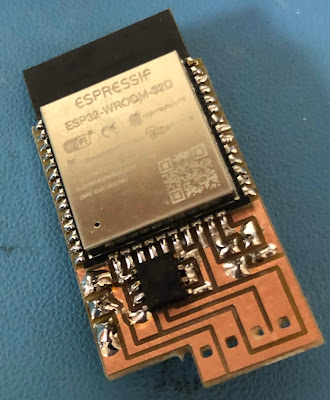 And, to my delight, it fits, and the keyboard PCB fits over it with no problems! 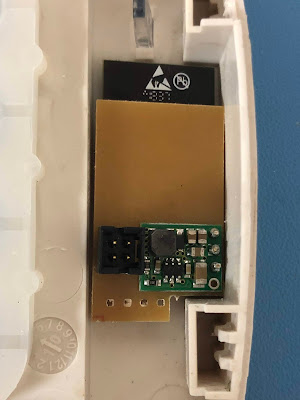 So, yes, I can actually move away from ESP8266 now. I have to migrate and re-work the various tools and modules I have made, but once done, I can continue development on ESP32 only. Yay!