Back in 2016 I posted how there really was not enough information for anyone to vote on the referendum to leave the EU. How could members of the public make any sort of informed decision.

We are now way down the line, and things are sadly only slightly better.

I am amazed how this has polarised the country. Even people in "my bubble" can be massively Brexit still and there is no reasoning with them. And so much disinformation still exists, even now where Boris Johnson said we could ban Shark Fin Soup if we left the EU. WTF is that as an argument? Who cares about Shark Fin Soup?! From what I can tell it is either "not true, WTO rules means you can't ban it", or "true, WTO rules have an exception, but that means we can ban it now even in the EU". Still the mad sound bites of disinformation persist even three years later.

If you are a good businessman then change can always been good - you can always exploit it. Even when you look at war and the blitz spirit (as has been evoked regarding Brexit?!) there were "businessmen" that made money (and were illegal as black market traders). Imagine in the blitz, in an air-raid shelter and bombs dropping - we survived. But imagine if 52% of people in there voted for the bombs?

And if you know a change will happen you can be even better at exploiting it. It is coming out how some people in politics have direct personal gain linked to Brexit. Scary.

But "good" for some careful businessmen will always be "bad" for someone. That money they make comes from somewhere.

In my personal view I cannot see Brexit being good for the UK overall. It seems counter intuitive to be isolationist, and then still want to trade with the world.

Personally, I am hoping that I am finally doing well enough in business that I, and my family, can cope. But that is by no means certain, and I am scared! Even if it was the case, I would not wish the hardship that will ensue on everyone else, whether my friends, my staff (also friends), my customers (also many friends), or anyone else.

One of the huge issues is uncertainty.

A50 can be revoked, or delayed, so nobody knows for sure what will happen right up to the wire! 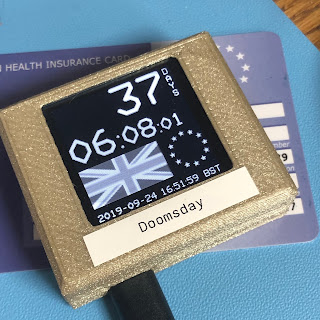 We cannot have this again - we need the A50 process to be 100% certain, no delays and no extensions, and no way to revoke. A country leaving EU makes one decision to do so and then has time to make it happen, and that is it. That needs to be the case even if the UK decides, again, to leave.

What we have now is hugely damaging, maybe more so than having left already!

As EU members we should change the A50 process to fix this!

We import from China!

What interested me was comments from a close friend. Smart chap. We make products that use chips that come from outside the EU, like China. The comment is that Brexit is therefore not so much of an issue, surely.

But we (UK) don't import from China, we (EU) do. So when we Brexit, we (UK) have to have the trade agreement to import those parts to UK (not EU). Is that in place? - well I don't think so, even after many years.

It is so easy for anyone, even smart people, to miss some of these obvious details. Brexit is not simple.

[I am not sure China is necessarily the best example, but assuming just because we trade with a non EU country before Brexit does not mean we, as the UK, have a trade deal to allow trade after Brexit. It needs negotiating. The government claim to have managed to negotiate several "continuation" deals already, which is a good start, but they needed negotiating, and more are needed still, they are not just what automatically happens when we Brexit, which is what people were assuming.]

Will of the people!

This is perhaps the most annoying part! We accept people can change their minds as we have a general election every few years, but somehow Brexit is a "fixed point in time" (DrWho?).

In fact that the referendum was a "poll" (as stated in the legislation). It was not a mandate. And then it was (as decided by courts) conducted outside the legal constraints for such campaigns. Had it been a mandate it would have been struck down, and was not only because it was just a poll.

As I said in my 2016 blog post, I did not know what was the right way to vote. I voted to remain, but I did not do that as an informed decision by any means.

Now, we have some clues on the issues with disentangling the UK from the EU. At best we have some good deal with EU - but such a deal means we have to abide by a lot of EU law on the way we do things with no say in such law! The alternative is not having a good deal, which is worse.

We have the crazy situation now that calls for a "people's vote" are called out as undemocratic. The idea that asking the "people" to vote on this is not democratic is, well, mental!

We also have the issue that this is "one sided". We leave, and no way we ever re-join on anything like he deal we have now. We stay, and we can vote to leave again in a few years if the EU goes OTT and we don't like it. So leaving is a "really really sure you want to do this" type of thing.

I see the only way to resolve this is something that everyone can see is the (current) "will of the people", such as another referendum or a general election fought on the Brexit issue. Only then can anyone say, again, "you lost, get over it".

That will still be bad. A lot of people convinced that Brexit is right will be cross. I don't know what to say. I have yet to find a single person who can explain the benefit of leaving!

I do feel that if Brexit is cancelled, whatever government we have will need to make a big issue of "why Brexit". They need to tackle each and every one of the reasons Brexiters wanted to leave, in detail, and with actual change. Some things are simple (blue passports), and some are not so simple, but they all need addressing. I feel we can sort the underlying issues and stay in the EU. Why not?

But are there bad EU laws we don't want?

Yes, absolutely, there are laws that, in my view, go too far, or get it wrong. Not least of which was the damn cookie stuff creating those damn cookie consent warnings on every damn web site! That was technically stupid in so many ways, and I am sure many other such laws are "wrong". Sadly GDPR adds to that - mostly good - a tad bad.

The problem is that there are always wrong laws, and the UK has passed many (RIPA / IPA) that have bad things in them on both moral and technical grounds.

The EU is not immune too this, and neither is the UK. But leaving the EU means we have no say in such EU laws. We cannot fix them. It does not, however, mean we can ignore them as almost any trade deal will mean complying to standards set in such laws.

And to be fair, most of the laws are good! As a manufacturer, the hassle for CE marking is a nightmare now, but even though it is hard work and costs a lot of money it is all "good". It stops stuff catching fire, for example. The UK would mirror almost all EU safety laws as that is both sensible, and needed to sell to EU!

Email ThisBlogThis!Share to TwitterShare to FacebookShare to Pinterest
Labels: BREXIT