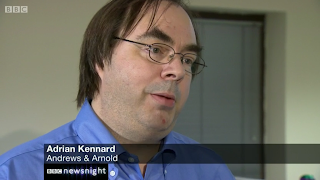 I thought it would be useful to explain a bit about being on TV as it was all somewhat new to me, and not something any of us ever expect to happen.

It all started a couple of months ago. Being a little outspoken on some issues, including a few controversial ones, I was contacted by Sky News and asked to do a live interview. I was, of course, honoured, excited, nervous, a bit scared even. I had a couple of days notice, and this meant some sleepless nights worrying about what I would be asked (I had no more information than the general topic). We rehearsed it in the office, with other staff grilling me so I can try and be ready for anything.

With a 24/7 live news channel it is clearly very production line the way they do things. They wanted me there 10 minutes before I was on air, which seemed cutting it fine to me. On the day I got a train and they arranged a taxi to meet me at the station. Little did I know the station had a North and South exit, and you can guess what happened. Eventually the taxi and I found each other and I arrived with maybe 2 minutes to spare - a quick bit of make up, mic'd up and sat at the table with the interviewer and one other person. I guess they do two people in case one does not make it as that allows the slot to go ahead anyway. I was asked questions, and was on air for maybe 5 minutes, and then out of there. Yes, the taxi messed up so I had to wait half an hour, during which I was texted, emailed, and tweeted by all my friends and many customers commenting on my performance (thank you all).

The next time (on Sky again) was easier as I knew what to expect. This time it was a studio in central London and I was interviewed by remote. The taxi messed up at Waterloo, and I ended up walking in to the studio while the commercials were on before I was live. Sat down in front of a camera and a monitor, asked questions live for a few minutes, and gone (taxi waiting this time).

With both of these it is very difficult to get across what I felt were the important points. You are very much stuck with what questions are asked, and don't see a script or anything. Even though live, it is hard to put over the message you might have. In both cases I think I managed at least one key point, which was good. If I have to do any more, then I will know what to expect and I am sure it will all be very run of the mill stuff.

However, BBC Newsnight was very different. This is not down to BBC vs Sky, but down to the fact that it was a pre-recorded interview as part of a journalistic piece on the live program. Pre-recorded is very different, as I know from decades ago where I did live on-screen timing for sports events. Live TV is stressful for x minutes, and then it is over. Recorded is lots of faffing about until everyone is happy, and then they go off and edit stuff, so the work is far from over when filming stops.

I was quite pleased that the BBC decided to come to us. Apart from the chance to get everyone in the office madly making sure everything was tidy (well done guys), it saved travelling and annoying taxis. The interviewer, producer, and camera man turned up (no make-up, damn!). They had lights and camera, and we filmed lots of stuff, and in many cases several times over. Again, no script - they had ideas of what questions they wanted and I answered, often in different ways each time. They chatted over the issues anyway the whole time and recorded that on audio but off camera. I am sure this helped them understand the issues and create the overall piece that went out on air as they made some of the points and produced quite a good piece overall. Even do, trying to get my messages across was hard. 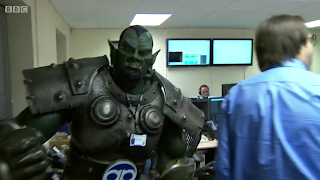 The camera man knew his stuff, and was clearly keen to do a few arty shots. He started by making the office less tidy(!), putting some boxes of cables on the floor and doing a close-up on a dangling cable. Why he did my shoes (sandals) I don't know :-) and he was very keen on the orc. We moved the orc in to the main office specially (losing an ear in the process) and I swear the orc got more airtime than did I! We managed to make the office look busy - they were later than planned but a couple of people were still in and a couple more came back in specially along with a friend (thanks Mandy).

Sadly, what went out was a total of 46 seconds, with one question and two of my answers put together. It makes a point, and gets A&A on the TV, which is all good, but it seems a shame spending well over 2 hours recording for 46 second. That is always the way with these things though.

Hopefully I'll be invited back, by BBC, Sky, and others. I think we do have important points to make from time to time, and I'm starting to get the hang of this TV stuff now. No autographs!
Posted by RevK at 08:40:00