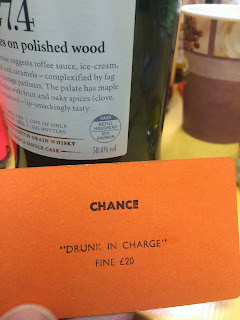 So, we had fun yesterday playing an antique (looks like late 1930's) Monopoly game (thanks Mikey), and drinking some rather stong whisky (thanks Daryl and Guy). Kev won!

The game has original pieces and dice, but the dice were rather too worn to use. So I printed some dice on the 3D printer, as you do.

But just printing some dice is boring :-)

The design of a normal six sided cube die is pretty simple. I use slightly rounded edges, and put dimples for the numbers on each face in the usual way. I then arranged the printing so that it was done from one corner, with the aid of some snap off support legs to stop it falling over while printing. This meant that there was no top or bottom face (that always prints a bit differently). The lower faces were not quite as smooth as the top faces, but the dice produced were perfectly good. (I have not done hundreds of rolls to confirm no bias, yet) 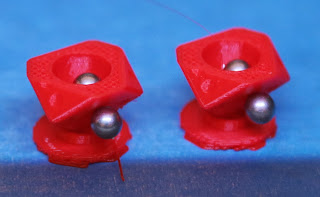 But then I thought I would have some fun - being a 3D printer you can do things that would not normally be very easy, such as including a spherical cavity in the centre of each die.

I then dropped a smaller spherical magnet in to the cavity during printing. I had to put one on the outside to hold it in place. Continue printing, and now I have space dice! i.e. dice you could roll in space on to a metal plate and they would land and stick there. As the magnets are free to move there is no bias created. 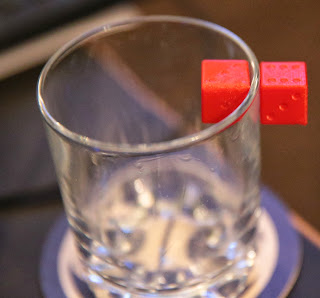 The problem is that they stick together, so not easy to use as a pair in a shaker. Fine if rolled separately. But fun, none the less.

Anyway, for the game I did a pair of dice without magnets, but I did, for fun, put a small ball bearing in the centre cavity of each.

This created a rather unexpected, and useful, effect. The dice worked perfectly for playing, using the shaker and rolling on the board, but they had one rather useful feature. They did not roll far. I do not think we once had dice go bouncing off in to the distance under someone's chair, as is normal in any such games. They did roll a bit if you tried, but generally they just landed and stopped. Obviously in such cases using a proper shaker is a good idea to avoid someone setting up the dice and just dropping them, but it was rather interesting. I'll probably find someone has patented the idea already.