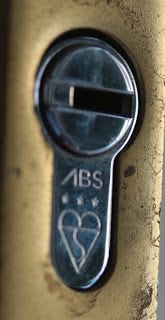 These have a lot of security measures that make it very hard to pick the lock, or force it, or break it. They are almost impossible for a would be thief to get past, which is good news.

However, part of the security is the keys themselves. The keys are impressive, high precision flat keys that even include a magnet as part of the mechanism. You can't just walk in to a lock smith and get a replacement key cut!

For example this key (which is not my door key):-

However, these are no match for a 3D printer. Based on nothing more than a picture of the quality of the one shown above, an off the shelf 3D printer, and a magnet that costs 10p (bag of 50 for £5 next day from the internet), I can make a key that works.

And we have a key in under 10 minutes!

Just add a small magnet (which took another 10 minutes for the glue to dry), and presto. 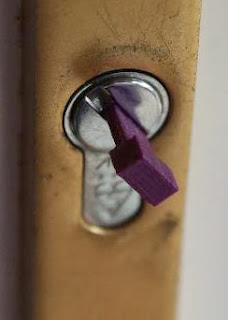 A few more details on how hard this really was. I measured the key this morning and made the openscad for it, about 30 lines of script. I printed, and it was a bit tight as the plastic tends to over print a fraction, so I adjusted the thickness 0.2mm. That fitted in the lock smoothly, so I then tried to glue the magnet in - I had to adjust the hole for that similarly and printed a new key. I found superglue was useless and managed to lose a magnet in the lock which I was able to fish out. One more time, and araldite for the magnet, and the key worked. I did not have to adjust my guess at the milling depths or positions at all! The most complex bit was the angled pointy bit at the end. The whole process took slightly longer as I had to print off a different key that was not actually my front door key for the pictures above - I am not quite that daft, honest.

Now I have a template I can easily print any more of these in around 10 minutes flat, and the levels are course enough that a simple picture like that shown above, or a modelling clay impression would easily be good enough.

This is not a slight on ABS - the vast majority of the security in these locks is the design that makes it hard to pick, force, jog, or break. Any mechanical lock will suffer that the key can be copied. The problem is that key copying used to need more specialised and harder to come by tools and key blanks, now something as simple as a 3D printer will suffice and no real skill needed. The time has come for proper keys with RF and encrypted codes - something that you cannot simply copy.
Posted by RevK at 11:48:00