Went to the 3D print show in London yesterday - it is on today and Saturday too.

My first impression is that it is rather disappointing in size - I was expecting bigger. They even sell 3 day passes! 3 hours was more than enough.

The main reason I went was to see things in action, obviously, and there were plenty of printers working, and lots of print samples to look at and touch. I went because we got a Maketbot Z18 a while ago. After the Replicator 2 we had high expectations and it turned out to be crap so it was sent back. Markerbot were there and assure me it is a lot better now, but the easy option of simply buying the next model up from the same supplier was missed, and I was already at a 3D print show now. 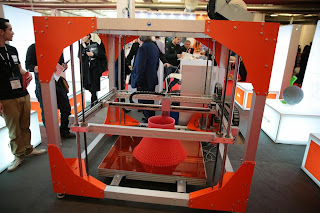 A seriously big printer! Seems they sell to universities and artists. Very cool if you are in to that sort of thing. I can't see it being something we can sell as a service well though. Shame, as it would be rather fun!

Very impressive to see something that big working well, and some of the sculptures they had on display were very good. 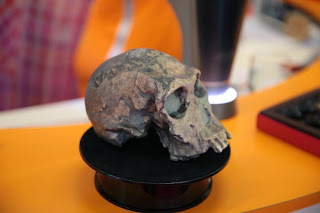 A printer that uses paper! Yes, it works a sheet at a time, pressing and gluing it to the sheets below, and cutting an outline, ink jet full colour printing over the cut edge, and depositing glue for the next sheet. Eventually you end up with a block of paper. You pull off the pre-cut blocks of paper around the edge of the print and are left with a full colour solid paper model which needed no support printing or messing about. Recycle the waste paper, maybe varnish the artwork, but the results were impressive, albeit perhaps a bit slow. 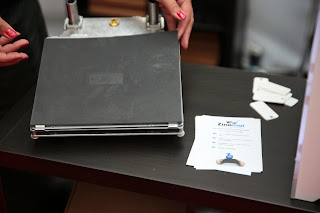 A magnetically attached flexible print bed mat. The idea being you print on it directly, but can lift the mat off the base and it flexes to allow the printed artwork to come off easily. We may have to get one of these for the Replicator 2 that we use. 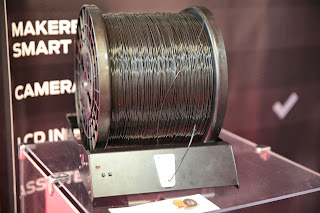 There were a lot of stands doing consumables, and everybody's PLA was better than the others. Rovosavvy have a new line in PLA which they claim is of the highest quality - no impurities, very close tolerances on size, etc. But they are doing it in 10kg reels, which, as you can imagine, will not work well. Mostly the filament is fed from the extruder pulling it off the reel. So they have a novel approach of using these motorised dispensers that have a tension triggered microswitch that reels off more material. May have to get some of these :-) 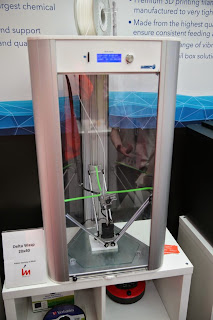 I did eventually find the printer I was actually looking for - the WASP. It is a delta printer using three fixed motors to drive the 3D, and one floating extruder motor. It does a 200mm diameter base and 400mm high. And what can I say, a delta printer just looks cool. With very few exceptions, almost all of the printers were traditional X/Y/Z printers, some with moving bed, some enclosed, and a variety of sizes, but delta printers were much less common. One of the cool features of this printer is the visibility of the ongoing print - which is much better than the more traditional arrangements.

The fact that three of the motors are fixed also allows much greater speed - they claim up to 1m/s even, and they did have one printing pretty fast on the stand.

So I suspect this will be the next one we get.
There were several other things. Several contract printing companies, some of which are very impressive. There were a few very expensive and very impressive printers. Only a couple of dual head printers. Some full height people scanners. One hand held stereo scanner. To be honest I expected to see more scanning stuff and was a bit disappointed.

There were also laser based printers that pull print from a pool of resin - very precise, but small area. There were CNC machines that milled things from a block of solid wood. Lots of different things to see, but still not a very big show. If you are in London, it may be with the £20 or so for a ticket.
at May 22, 2015