Well, anyone who played back in the day would have concluded that Age of Empires II (2) was the one to play - the III was not any good, but II was. With the Forgotten expansion, obviously.

It was fun, but at the house we played on some whacky network that was a wireless link from Reading on Tele2 which caused hassle as I played against a neighbour on the same system but the way it worked, even though we had real IP addresses, it did not allow people not the same LAN segment to communicate, which was crazy. We had do to some special ARP and/or route logic to work! Yes, it was that long ago...

It was something of a game we'd play at Christmas.

I had no idea that it is all making a come back, and, apparently, there is now an Age of Empires II HD, on Steam. They have redone all the sprites in higher definition and colour. It is meant to be windows only but it works under a wine steam install under my 5k Mac, and, well, FFS, it works! Well worth the £19 or so. 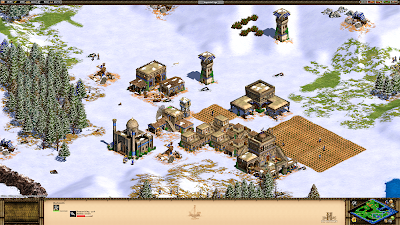 P.S. couple of quirks on the Mac, as usual with wine - the message box is black on black or something, so you type blind, and the stuff that does steam things generally does not work, but the game works, and multiplayer works, and I trashed James (KE55ARD, Also known as: SON GOHAN, kappa, Ailuj, TOP 3 PLAYER WORLD, DIETER HACKING, Hi Im Good, Hi im God, riot pls, rip in peperoni) on my fist multiplayer game. I was killing him, converting him, and building a wonder all at once, so sad.
at May 17, 2015

Email ThisBlogThis!Share to TwitterShare to FacebookShare to Pinterest
Labels: GAMES