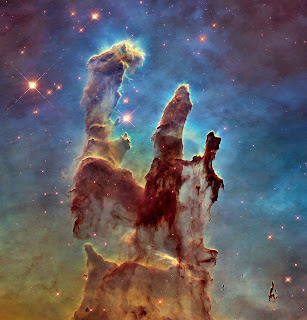 We all like to think we have a place in the universe and that our life has some meaning, or at least some impact on the world.

Unfortunately time is vast - and in the tens of billions of years that the universe will live on, at the end of the day, nothing I do will have any impact. Nothing the human race does will change the eventual fate of the universe, whether that is collapsing in to a singularity or spreading thinly in ever expanding space. We don't matter. I don't matter. Bugger.

OK, let's be a bit more focused - and think of now, today, this week, this year, just my lifetime. That is, perhaps a good start.

Unfortunately space is vast - and it really does not make any difference, even today, what happens on this rock. There are a hundred billion galaxies each with hundreds of billions of stars. We don't matter. I don't matter. Bugger.

Clearly I need to be a bit more focused - think of here and now. Do I make any difference? Now, maybe, I do. Phew!

But then comes along the idea of a "multiverse" or "alternate reality", as sci-fi writers tend to call it. The multiple worlds interpretation of quantum physics. It seems that most sci-fi series touch on it eventually, even Star Trek. One series, Sliders, which I am watching on iTunes at the moment is based entirely on this idea. It is an idea in physics that the universe is constantly branching in to alternate realities, copies of itself where some quantum decision is different. Sliders is based on the idea that one can travel between these realities.

What this means is that if I have a choice, A or B, and I make that choice, there is an equally valid and real universe where I made the other choice. There is another "me" in that universe. In some ways this seems nice - if I make a wrong choice I can perhaps console myself that somewhere in the multiverse there is another version of myself that made the right choice. Sadly it works the other way too - if I make a right choice, somewhere I also made the wrong choice.

This must give philosophers a problem too. In history, Newton caused problems with his theories on force and momentum. Consider snooker balls on a table - he says that you can work out where there will go exactly. The position of everything in the universe can be predicted based on where it was and how fast and what direction it was going (and its mass). It does not matter if you are predicting the orbit of a planet or the collision of atoms, the outcome is deterministic. Such a theory means we have no free will, that the universe will follow a path in to the future that is predictable at the atomic level and that there is ultimately no choice. A fatalistic viewpoint, which was understandably unpopular, especially with the church.

Quantum physics came along and gave us back some hope - it allows for truely random things to happen and a world that is not deterministic. Although, arguably, we don't control those random things, it does mean we can perhaps allow some free will.

The idea of a multiverse means that even if there are choices, all of the choices actually happen, and then end result of the set of universes that exists is no different whatever choice we make. That is almost as bad as a fatalistic view of the world.

Anyway, back to the meaning of life.

If we get really focused (or is that blinkered) and think of here, and now, and this universe only, do I make a difference?

I feel fortunate that I think I do - the choices I make every day have an impact on myself, my family, my friends, my staff, my customers, and even readers of my blog! I can choose to live my life making choices that are good. Doing the right thing. Making a difference in the world, albeit an insignificant difference in the grand scheme of things, but a difference that is beneficial. That gives meaning to life.

Whilst I may be fortunate, we can all make some difference. Even if you only have the power, here and now, today, to make one person smile, you can choose to do that and give your live some meaning.

P.S. No, I am not depressed - just been watching too many episodes of Sliders. :-)
P.P.S Slightly moved by some of the comments I have got via various means. Thank you all.
at May 13, 2015