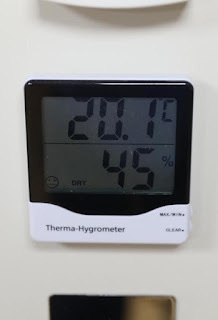 I am sure you all thought the story was over. It is not, yet!

One of the things the builder is responsible for is ensuring the work is up to the required building code. The council, who we paid to inspect the work, advised the builder during the process, and they have the job of finally inspecting and signing off the work. This is important if we ever want to sell the house in the future.

Things did not quite go to plan. The builder did not quite follow what he was told, and put the membranes in the walls in the wrong place, apparently. So the building inspector was not convinced it met requirements regarding condensation. It is important to avoid mould and the like in the future.

However, the builder was not convinced that what he had done was not sufficient and paid to have someone do "calculations" on dew points and stuff to prove his case.

This is just as well, as the alternative was that all three external walls would have had to be re-done, and then all the interior wood work and decorating re-done. Pretty much starting from scratch, and at the builders expense, but at my significant inconvenience.

So, the result, well, this is where things just drag on and on, and eventually we were told that there needs to be "mechanical extraction". I.e. a fan to cycle the air.

This strikes me as a problem for several reasons:-

So I explained these issues and we are now told the the requirement is for "mechanical extraction or AC unit".

Yay! We have the answer - I sent pictures of the AC unit (inside, and outside) and the hydro-thermometer showing the nice low humidity.

Then I have the strangest email :-
Sorry, but what? Since when does an AC unit cycle the air in the room with external air? That is not how they work and would not be at all efficient. What the hell is this guy on?

I have explained it again.

I suspect the builder is going to have to put in a fan, one that will never ever be used by anyone, just to get a box ticked.

P.S. I am told it is possible to have mechanical extraction with heat exchanger, but still, would I turn it on if noisy, and would the AC not do the job anyway?

P.P.S. They are finally talking to me (after months) and are now saying this is not just a condensation issue but one of air circulation for a healthy living environment - so the builder will have to put in a fan, with heat exchanger, anyway! Why they did not say that in the first place I do not know!
at July 27, 2016