Too be fair, this has happened at one time or another with every 3D printer we have had, I even did a video for sorting it on a Makerbot Replicator 2. 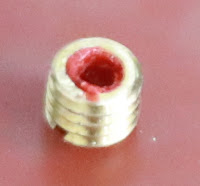 Well, sadly, it happened on my new TAZ 6, and was basically the same. At the top of the hot end, above the cooling fan, there is a removable brass bush. If you leave a print jammed up, it carries on with the filament stuck. Eventually that causes a plug to form in the bush, and you are screwed. That bush is not meant to get hot enough to melt the plastic, so it won't clear when that happens.

The fix is removing the extruder assembly (one Allen bolt), and disconnecting the hot end assembly (two Allen bolts). This allowed me to access the blocked bush.

I removed the bush (it unscrews). A soldering iron helped as it allowed me to push a 2.5mm Allen key in and use that to unscrew the whole thing and remove the filament down to the hot end. The hot end had to be warm enough to allow it to be removed. 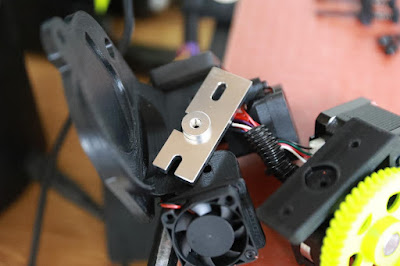 It could then remove the plug (some use of soldering iron, 2.5mm Allen key, and a pen-knife), and re fit. Now filament could feed all the way to the hot end.

I thought I was done, but trying to print still resulted in it jamming up. I stopped the print before another plug formed this time. I was stuck, nothing seemed to work. I adjusted tension on the feed roller, but no joy. It would feed, but too slowly and hence jam up and strip the filament with the feed roller. 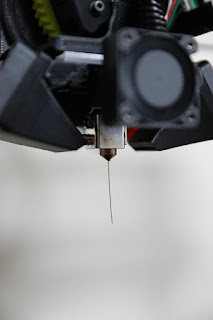 The final fix was a very fine "beading" needle which my wife provided, 0.45mm diameter, pushed in to the (hot) hot end nozzle (which is 0.5mm) to clear it. After that printing was fine.

It is worth checking things like the size of the needle, obviously, else you could damage things. I have a nice set of digital callipers for that.

I can only assume some contaminant, perhaps from the 6 year old reel of PLA I was using, had blocked it in the first place. Always worrying when something is not quite plug and play.

I have a partly printed TARDIS!

I have ordered some new plastic, and we'll see how that goes. For now, the ABS I have is working well. A print of a pangolin is going well at 8 hours so far.

Even so, I am still impressed with the TAZ 6 and feel it outstrips the Makerbot Replicator 2 in pretty much every way.

P.S. blaming the 6 year old PLA I was using is not unreasonable. Since this, many hours of printing using ABS and new PLA, and no sign of nozzle clogging up at all. Back to being plug and play...
at February 01, 2017