Odd use of QR code 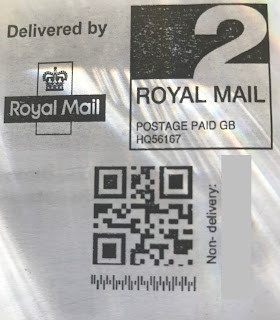 I was rather puzzled by an item in the post today (for someone else in the house) that had this on it...

It has a Royal Mail 4 state barcode for the postcode and delivery point suffix (the bit below the QR code). However, it is a lot smaller than the required size from the RM spec (as I recall) so is probably not actually doing any good.

But as it also had a QR code I was curious what that said - are RM using QR codes for postcodes now I wondered... That would not be a daft idea, to be honest.

Well, for start, the QR code is "bad". It does not have the required 3 units white border (quiet zone), though a lot of people seem to ignore that and it would usually read without. It also seems to have been truncated at the bottom by almost one unit, which is messy and could make it hard to read. That say, QR codes have a lot of built in error correction, so a good chance it reads on most readers.

What seems particularly special is the content of the QR code. It is the word "Scanned". That is it!