Life in the slow lane

My first week in Wales! I even have a Welsh driving licence now?!

I have a blog post about starting to sell the old house, but that has run in to issues, and will be a few more days.

But I am getting the hang of Abergavenny a bit, as much as one can in lockdown. I seem to be averaging around 3 walks to Screwfix every day at the moment!

This house is a bit odd in a way - newly refurbished to a very high standard, but we get the feeling they ran out of money, as some of the finishing details seem rushed. All just little things - the odd screw missing from a telephone socket; A fault in the backup immersion circuit that has not been fixed, so just not connected instead; Some boarding in the loft not quite finished; The drive is all nice, but just outside the gates has not been re-done at all (still part of the property) meaning cars scrape as they drive in/out. Nothing important, just not quite "finished" :-)

They did take all the toilet seats we think, as they all have cheap and nasty and not quite fitted properly plastic ones now. They took the light fittings, all except the nice one over the staircase, which they tried to sell us, and we declined! They did take all the bathroom mirrors and just taped up the power feeds and wrote "LIVE" on them. They took the Tesla charger, as expected, but also the cable from the consumer unit and the MCB! Nothing really a surprise (we did get a fixtures and content list), but a tad tacky...

There is a hot tub, yay! We are not sure what to do with it yet - no, I am not looking for advice on chemicals, etc (I have plenty already), thanks. But we discovered, after a week, that they have left it switched on, so it has been sat there at like 38C for a week it seems!

Oh, and I got the council tax bill, obviously!

We have had some success stories though - the utility room looked like it was going to be really hard to sort out, but it turns out the washing machine fitted perfectly with just a shelf raising, and the tumble dryer fitted perfectly with a unit removing and a tile removing. We were even lucky drilling the 4" hole as we think it may have once been a door or something - it was new brick and insulation and not stone! (I say "we", when I mean "Jim", obviously). 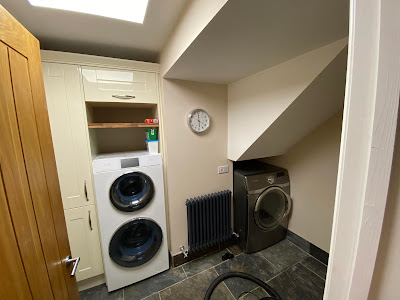 Many more things still to do, but we are settling in. I hope to get my desk today, which will be really helpful, as trying to work on a wobbly drop leaf table surrounded by boxes is "challenging". It is only 3.3m long, but getting that worktop upstairs is going to be, shall we say, "fun"... Just fitting stuff in to a 60% smaller "man cave" space is a challenge in itself.

Fingers crossed for next week going well with the fibre finally working and my office set up...

Email ThisBlogThis!Share to TwitterShare to FacebookShare to Pinterest
Labels: WALES