It is a long time since we moved house!

One of the reasons we chose this house is that it has been refurbished to a high standard in the last year or so. It is over 120 years old but all modern inside.

The owners did some things very well - power sockets - loads of them - every bedroom has five double sockets so every corner is well covered. This is, in my opinion, quite unusual. So well done.

But these were not terribly technical people, so even in the 2020's they had UHF cabling and something called "telephone" cabling to some rooms. I believe it is the old way people used to talk to each other - and being phased out in a few years anyway :-)

One saving grace is that the telephone wiring was actually done using cat5e cable, so we have traced which wire goes to which room (with one mystery 5.7m cable run we cannot find) and we are repurposing for networking.

Sadly the satellite cabling is also slightly lacking - when I did our old house, decades ago, I ran 2 coax to each room and 4 to the main living room. That has been used for Sky, Sky+, SkyQ, and old UHF in various ways since, and not needed upgrading. In the new house - one coax to living room, and one coax to one of the bedrooms. Thankfully the SkyQ works off one cable giving us around ¼ of the channels. I don't watch Sky, but my wife (and the grand kids when they stay) do. So the challenge is neatly getting a second coax from the dish one end of the house to the living room the other end without looking untidy. Part of the challenge of any work is the metre thick stone walls in places.

We have WiFi sorted now, well, sort of - I need to print a mounting bracket once I unpack the 3D printer. But it is working with a North and South side AP, one each side of the stone wall in the middle of the house.

Of course we have no Internet as such - the WiFi is connected to a 4G dongle, which just about works. This is because PSTN and Fibre services ordered early November are not in. How the hell a simple PSTN line for broadband can take BT plc t/a Openreach this long is beyond me. They have cancelled loads of appointments (system problems). At one point last week the engineer did turn up - and was in the loft ready to connect two spare pairs (just had to fit sockets!) - and refused to. Apparently because COVID! Yes BT have some new rules on not doing new line appointments - but that is not to impact orders in flight like this, and the guy was in the house, with the previous owners, and actually got to the loft before deciding not to install. It is mental! Since then loads more appointments cancelled.

If only I worked for an ISP! Well, the team I have are some of the best in the business, but even they are pulling their hair out over this. BT keep agreeing an appointment and then not turning up or cancelling for no reason. It has been escalated and escalated many times. It is now a house with "no existing service" and I think telecoms even makes me a "key worker" but no, BT are just failing. It is not even that BT are refusing to install, they are agreeing the "system errors" are wrong, and agreeing a new appointment, but then failing. We are not asking for special treatment at all - just a simple PSTN line install for broadband - bog standard - not even running new cable as there are spare pairs to the premises. 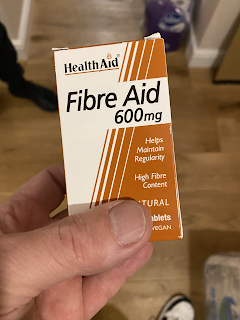 The PSTN lines are the quick and easy install to be there until the much longer lead time fibre Ethernet install is done. We know they take time. The irony here is that BT claim to be coming to do the fibre today! I'm not holding my breath, but that would be truly crazy if a full Etherway install can be done before simply connecting a new PSTN line. I was, however, sent a box of "Fibre Aid" via Amazon from someone (I have since found out who, guessed right first time), to give to the engineer if he has any problems. I hope he has a sense of humour.

There is still a lot of unpacking to do - the biggest issue for me is that I am moving to a room that is maybe ½ the size of my former "man cave". I agreed to the move for my wife's sake, as she loves the new house. I love it too, except for the room I have been allocated. It was to be a room ⅓ of the size, but we could not even stack all the boxes from my man cave in there which proved my point slightly :-)

There are loads of other challenges, including the tumble dryer and washing machine not fitting in the space in the utility room, but thankfully we have a son-in-law that is a sparky and handyman living a few miles away (almost all of the close family now live in Ebbw Vale, hence moving here).