As you will know from my previous posts, having moved to Wales (over a year ago now), I wanted air-con installed. I had this in Bracknell and am very used to it. Also, last year, it got stupidly hot. The good news is I am also installing solar panels and battery which should cover the power usage of air-con in the summer, and a lot more. More on that later in the month.

Last year we got air-con, and after months of faffing, it was finally taken out. It was simply not good enough in a lot of ways. I promised a blog on this, and you will have one, next week, when the new install is finished. But I can say it is very very promising!

However, today, I am blogging on the Daikin WiFi adapters.

Oh my, this was hard work!

The ducted units appear as WiFi access points, and there is a label and even removable sticker with the SSID and the passphrase. It even has a QR code, yay!

The QR code is quite dense, but guess what - it is not a WiFi connection code which your phone would understand and connected to the WiFi, no, it is just the "KEY" (passphrase) which the phone naturally thinks is a phone number. Why do that?

Connecting to the WiFi AP gets an IP, good, and there is a web page on the device IP, good. But it is just a set of free s/w licence details. No actual web interface. Just a simple page to allow setting the SSID and passphrase as a client - that's all it would need in an ideal world, but no. They could even make DNS such that it appears as a "splash" page when you connect on most phones. Not actually that hard. Shame.

The good news is that there is an app. And the instructions say to use the app. They have a QR code, but it just goes to apps.daikineurope.com which helpful explains you need the "Daikin Residential Controller" app. No helpful link to get it - no, that would be too simple. There is no "Daikin Residential Controller" app! There is a "Daikin Online Controller". There is an app called "ONECTA". There are a lot of third party apps too.

The Daikin Online Controller app does not work, but it does have step by step instructions on how to get things to connect, which I tried. They don't work. Lots of on-line help has the same, even videos. Things like "Hold MODE for 3 seconds" on the wifi module on the device, to make it show "AP" light. Well these units were clearly being APs, but the AP light was off, and pressing MODE did nothing. Very annoying.

I also have a wall mount unit, and the instructions are holding a button on the remote for 7 seconds, and then selecting a number. Again, that just does not work. Now, I know that worked in my old house with Daikin wall mount units. Again, very annoying.

It turns out "ONECTA" is the app you need and the old app does not work at all. Arrrg.

But then it insists you need an on-line account on some cloud services - not amused, but I was hopeful that once on the WiFi here I can do stuff directly and just kill off the app later. So went ahead.

If connected to the AP from the air-con the app "sees" it right away, great. You select, and it connects to the device, and then to the cloud service, which obviously does not work as the phone is not on the Internet - it is connected to the device. If you swap WiFi a bit you can progress more, but ultimately you cannot actually get it working.

I found loads of on-line help, all of which appears to be based around the older app, which no longer works.

Eventually I found you can manually add a device on the app, and if you manage to pick the right options you eventually get to ping pong talking to device and your normal WiFi and it will put the device on the wifi. Finally. Hard work or what?!

Worryingly the app wants to know where I am so it can check local weather - why? The temperature I want my room does not depend on local weather. Worrying.

Anyway, I have ducted units on line now, but what of the wall mount air-con unit? It is not appearing as an AP even. Well, thankfully the manual adding instructions on the ONECTA app does explain - you take the cover off, open a flap, pull out a wifi controller module (looks just like the ones on the ducted units). But on this one you *DO* have to press MODE for 3 seconds and the AP light comes on. WTF? I now have that unit on-line too. 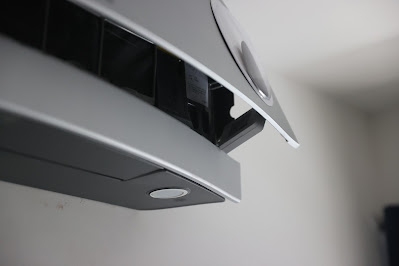 The Daikin units used to have some simple http based APIs that allow basic control. Loads of details all over the internet. Guess what? They don't work. So this will probably mean some reverse engineering.

P.S. the wall mount controls for the ducted units have bluetooth and an app that just works quite nicely with them without any hassle. Also, the previous air-con attempt had neither WiFi nor Bluetooth - so whilst this may seem some hassle, it is already a massive improvement!

P.P.S. (Thanks Matt) WHY OH WHY do they still broadcast the set up SSID even when a client?!