As you know, I got air-con last year, and it had to be taken out. That was a Mitsubishi system. It did not manage to heat or cool even the smallest room sensibly, and had a show stoppers in terms of temperature control of the rooms. So yes, removed. We did keep the lossnay for fresh air though.

I have now got 4 Seasons Solutions to put in new air-con. It works. A lot of this blog is comparing the Mitsubishi with my new Daikin system.

The Mitsubishi system was set up with two outside units on the back wall. Each drove an inside unit. The Daikin is done with one outside unit. It is ironic that the old system seemed to really lack power to actually heat or cool even with more units of a similar size.

A single unit is better, not just for appearance but if there are any issues with planning permission. A heating only single outside unit is actually a permitted development. Yes this unit cools, but you then get in to interesting debates about what happens if you change a heating only (permitted development) to a heating and cooling (non permitted development) and how such a change "does not change the external appliance of the property" so is outside the scope of planning permission. One hopes we don't get in to that debate. In our case I have pictures of the place from just before we moved in with two large outside air-con units that had been there for years, so at best this is about the fact that the air-con location is slightly different. I doubt there will be issues, and retrospective planning permission is not usually an issue. If it was two units, it would be a different matter. It was quite handy as the second power cable and RCBO can be used for the solar install now.

The Mitsubishi system had two inside units, each covering two rooms. I should have decided against this, in hindsight. The plan was that we would have motorised vents to allow each to work one room, the other room, or both. That actually worked. We also had relays to switch the controller from one room to the other (it oddly only handles one controller!). That too worked. What did not work is using the controller for temperature, so we could never control temperature in the second room on each unit (assuming the air-con worked properly in the first place, which it did not). So that was a show stopper.

The new system has 4 separate inside units. Even so, it is cheaper. It is cheaper than the rest of the original bill after paying for the lossnay to stay, even. 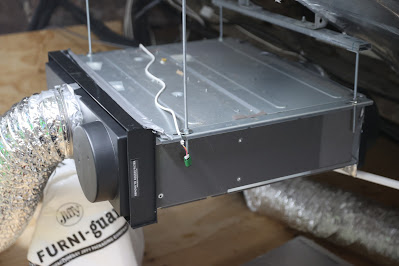 Like the Mitsubishi, these inside units are ducted. This is nice as it means no big wall mount unit - which frankly would have been difficult to find space to mount in some rooms.

However, one of the rooms has no loft. With the Mitsubishi system, we managed to run the air flow duct behind plaster board (there was a surprising gap) and behind wardrobes in a room above. It was a lot of work (which we did, not the installers). We decided that trying to run two more ducts, at 4 times the size each, would really not be practical. So we went with one of the 4 rooms having a wall mount unit. The pipework for this was somewhat easier. 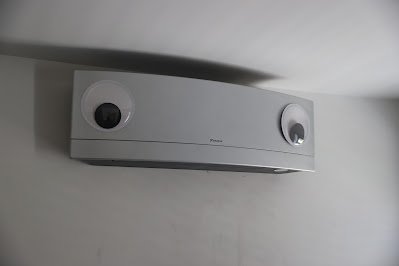 We kept the original duct for the lossnay, so we still have fresh air.

The ducts were different. The new system had ducts that are 4 times the size of the Mitsubishi system. This is where we changed one to the new ducts. 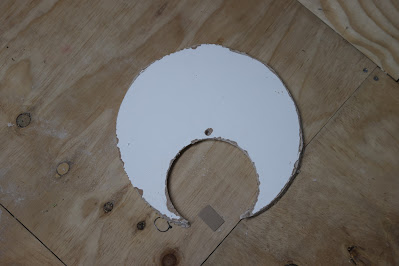 The vent/covers are nicer too. 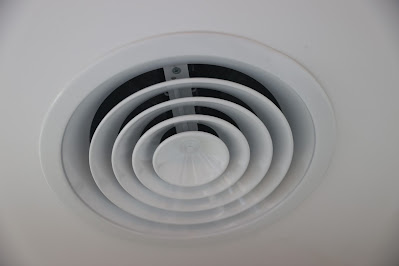 What is more fun is the original Mitsubishi installation had ducts that were half the size of this, i.e. 1/8th of the size we now have, and they were adamant they should have been enough!

The Mitsubishi system had a separate control for the lossnay and air-con, which was annoying in itself for an integrated system. It allowed one air-con control for each inside unit. It could not use the controller as temperature reference - crazy.

The new system has wired wall mount remotes. They are not bad. (yes, some holes to fill). 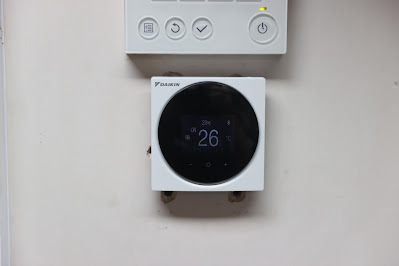 The system can use the controller for temperature - yay, and all 4 rooms have separate control (the wall mount uses an IR control though). The system, as a whole, is only heat or cool at once, but each room is separately controlled at separate temperatures at the same time. As we have central heating (also controlled by Shelly modules) if we ever need mixed heat and cool we can do that easily enough.

The new controllers also have bluetooth and an app. This means the controller itself is pretty simple, and all the admin or installer menu stuff is on the app. Not a bad compromise. 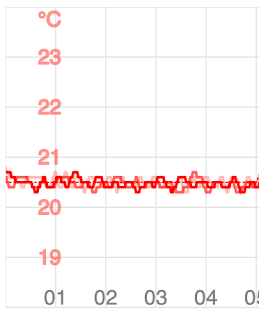 This is where the Mitsubishi was really limited. There was no WiFi or bluetooth. The unit did have some connections that allowed for external control, so as fan speed, but not something simple like heat/cool mode. I was expecting to connect to this, and maybe even reverse engineer the wired remote. I stopped doing that when it seemed clear that the whole thing was not going to work well.

The Daikin system, however, has bluetooth on the wired controllers, and wifi modules. OK, yes, I have reverse engineered and replaced the WiF modules, but even so, that was not too hard. What they provided did actually work (if you are happy with a cloud based system).

The fact I now have fine control using my own WiFi modules is a real win. At present it is heating my room over night (see image on right).

Some limitations of ducted systems

Having now tried two ducted systems, they are a little different than the wall mount I have been used to, and some things still hold true for that.

Both systems had few fan settings. The Mitsubishi had 4 levels, but only the top two actually ran the compressor, the first two just blow air, so very limited. The Daikin has 3 levels. The wall mount Daikin has 5 levels and "auto" and a "night" mode. I'd love a "night" mode on the ducted systems to be honest, but looking in to noise attenuators possible, or just getting used to it.

Another caveat is that a ducted system, having vents in the ceiling, it can take a while to heat as the heat fills from the top of the room - this creates a noticeable lag in heating at bed level. The wall mounted unit is much better at this as it able to direct the airflow down and create more circulation.

The proof of the system

The real proof will be in the summer, and we will see. Tests so far suggests it just works, and works really well.

Almost forgot, as people will ask: It cost around £10k and took a week to install.