If you are looking for a 3D scanner, then there are several choices. I have tried two so far.

The first, having been impressed with Makerbot, was their laser scanner. It costs around £1000+VAT, and is a turntable laser scanner. It does a reasonable job, but I have to say I was disappointed on a couple of counts.

This is a banana, scanned in Light mode, as a banana is light. 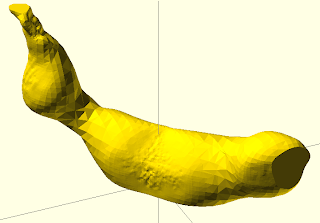 I scanned again in medium...

It is not too bad.

The second scanner I tried is basically the Asus version of a kinect, the Asus Xtion Pro Live, which is available from around £110+VAT, and the Skanect s/w for my mac which was around £60+VAT.

It is not actually intended as a 3D scanner even, but captures depth data for a whole scene. You can move around an object and get all sides within a few seconds. I scanned the same banana on the bed of the Makerbot digitiser in under a minute.

But what is really clever is that you can scan anything that will sit still, even people. So making a bust is really easy. But if you want to scan a room, you can. It also fills in colour at the same time if you need (not useful for 3D printing) and is a fraction of the cost. A definite winner. 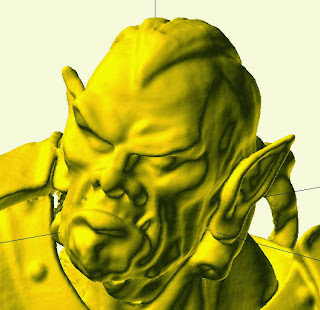