Argos: Can't tell difference between an invoice and a credit note! 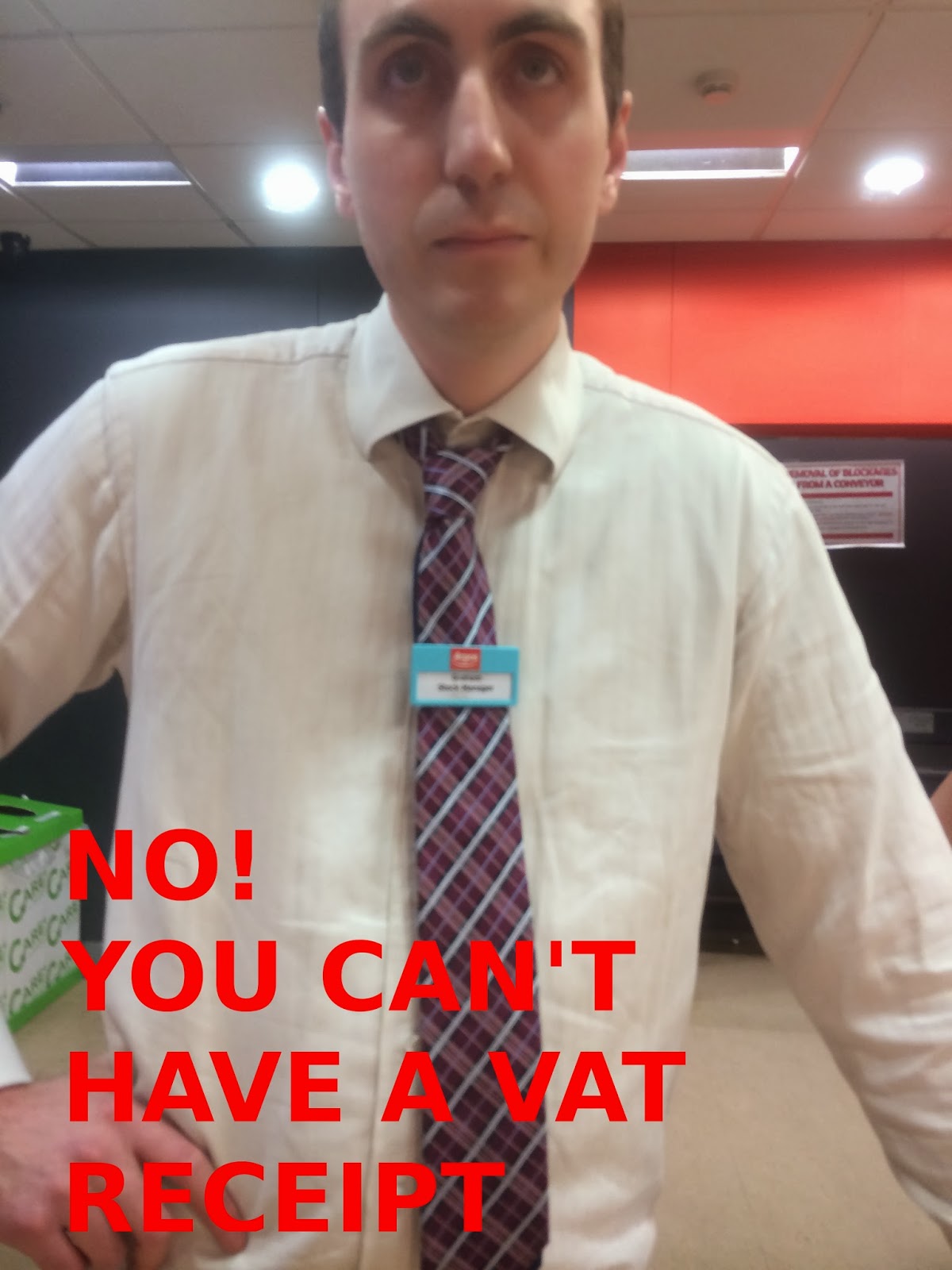 We got some things from Argos. It was actually a pile of mobile phones for testing voice SIMs. It came to more than £100.

Having got the phones I asked for a VAT receipt. The order ticket does not have the details of VAT rate, or amount, etc, so is not good enough to reclaim VAT.

Now, in most shops, this is simple, they can either print off one, or hand write one. It takes a couple of minutes, and you have the VAT receipt. Without it you cannot reclaim the VAT, so losing 16.66% of what you paid. Obviously one could hope not to be picked up on a VAT inspection, but we do things right, and it is generally no hassle to do things right.

He went away for about quarter of an hour, and finally came back with a hand filled out Credit Note!

For those that do not know, a credit note is the opposite of an invoice/receipt. It says the goods have been un-sold and the money (and VAT) are to be paid back. If we, as a business, have a credit note, we have to pay the VAT part of that to HMRC.

So, now, technically, instead of just being unable to claim £40 of VAT, I should actually pay HMRC an extra £40 of VAT.

I pointed out his mistake, and he went away. He came back and was absolutely adamant that this is all he can give me, and his store support people he called confirmed it is valid and legal and not a mistake. He said he is not allowed to issue a manual invoice. He also could not issue an invoice from his tills.

I argued, and showed him the The Value Added Tax Regulations 1995 on my phone, but still no luck.

I am at a loss now - I have advised HMRC that Argos don't know the difference between a Credit Note and an Invoice. I have also asked how they want me to handle the VAT. This could result in Argos getting a VAT inspection, with any luck.

In the mean time I have sent a copy of the Credit Note to Argos and asked for them to pay it. After all, it is a legal document stating that they now owe us money, and for which there is no record of any payment having been made. They chose to issue it. They were adamant it was not a mistake. So a nice gift from them. We'll see what happens.

Update: those regulations have been amended, but the legislation.gov.uk site does not keep them updated, which is a nuisance. The do have a way to list changes though. The amount for a simplified retail receipt was changed to £250 in 2003, and a general option for a simplified receipt up to £250 was added in 2012. However, the order slip they provided did not meet even those requirements (not showing VAT rate), so I was still right to ask for a VAT receipt (even a simplified one), and giving me a credit note was completely wrong.

Update: Argos say on their web site that to get a VAT receipt you should email them. I did, the reply is that they cannot send one, and I should ask in the store. oh what fun!
Posted by RevK at 15:33:00