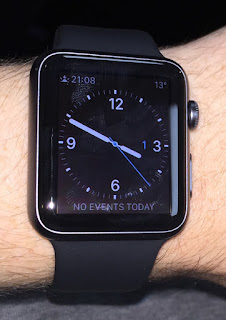 Ignoring, for a moment, that it is almost certainly an issue to use an Apple Watch to mess about texting and crap whilst driving, simple as "Dangerous Driving", I was wondering it if was illegal to simple make/receive calls for example.

This is covered by section 110 of Road Vehicles (Construction and Use) Regulations 1986, it seems. It is specific legislation for using mobile phones, hand-held, whilst driving.

There seem to me (not a lawyer, remember) two reasons an Apple Watch it not prohibited by that law.

1. The definition of "hand-held" which is "a mobile telephone or other device is to be treated as hand-held if it is, or must be, held at some point during the course of making or receiving a call or performing any other interactive communication function". I would not say a watch is "held" in any way.

I suppose in many ways it is the same as a bluetooth headset, which is simple allowed for mobile phone use in cars. The issue is more to do with sending/reading emails, and texts and crap on it whilst driving.

Again, another pointless law that totally failed to keep track with technology.
at June 01, 2015