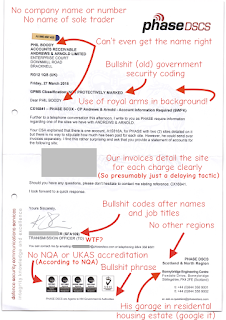 Bit of a waste of time - going 400+ miles to Falkirk and the pursuer did not even turn up. Oddly court said most we could claim on expenses / costs was £70. Thanks to Phil for going.

Obviously, as always, this is just my personal, honestly held, opinion of these matters. I'll be happy to correct any factual errors.

The case was pursued by "Phase DSCS (UK) LLC", a fictitious company not listed in Companies House. After much chasing we had an email from Peter McGhie stating that it was "Phase DSCS (UK) Ltd" that was actually suing us (company SC502663) which was incorporated April 2015, but the case was about us supposedly failing to provide broadband adequately in 2014! Obviously we had provided broadband to someone, and fixed faults when reported. He claims the service never worked and was rejected and not put in use even though, on one of the lines, the only fault report was 7 months after installation, no fault seen by us or found by BT and service was heavily used with no apparent issues for nearly a year in total. Clearly, in my view, trying it on. He was claiming nearly £3000 even though we have a limit of liability clause very clearly on the order form and terms.

One of the real issues here is that this guy tries to hide the identity of the legal entity in question, or so it seems. The letterhead does not say the name of a sole trader or partners, or the name of a Limited company or a company number. When asked directly for company name or number he will often not say - it took ages to get him to state the company Phase DSCS (UK) Ltd having put a bogus company name on the summons.

But who is Peter McGhie? Who is "Phase"? The clues are not hard to find on Facebook and twitter, and it seems to me that he is a one man band - he is director of Phase DSCS (UK) Ltd and was director of Phase Broadcast Ltd which he dissolved in Jan 2015. He claims to be Scotland & North Region but there is no indication of any other "region".

The best bit of bullshit is "PHASE DSCS are Agents to HM Government & Authorities". What the hell is that meant to mean? He uses the (old) government security classifications on letters and emails to look impressive.

But just look at the letterhead - he looks all very fancy, and even uses the royal arms in the background (a breach of the Trade Marks Act 1994 if you don't have permission from the Queen). He quotes four NQA registrations for various ISO certifications, but NQA tell us that he does not have any. He also quotes UKAS.

His address is "Bonnybridge Engineering Centre", but that appears to simply be his garage. Not 100% sure, but I think it is this one. From the address, it is likely to be one just like this if not this specific one.

Sadly we had no chance to actually defend this in court or counter claim (if he had got the pursuer changed to him personally, we could have, as he still exists). We have been trying to claim early £300 for unpaid invoices, and been thwarted by the lack of clarity on who exactly contracted with us.

What was interesting was when I looked up the replacement for Business Names Act which is now part of The Companies Act 2016, I found clause 1206. It looks like it was almost written for this case - where someone in breach of 1202 is suing someone over a contract breach and the defender has a counter claim that they have been unable to pursue because of the breach, the case must be dismissed. That is exactly what is happening to us.

We'll have to investigate the issue of costs more.

If you have dealings with this man or anyone like him, it is well worth looking for warning signs and being extremely cautious dealing with anyone that refuses to properly identify their legal entity.

We've reported him to NQA, UKAS, Trading Standards, Companies House, the Cabinet Office (who seem to handle the royal arms), and the Police.

I am very disappointed that it seems one cannot even get the simple cost of traveling to the court when a case is dismissed like this. I do hope Phil had a good time though.

I am also very disappointed that the court process has no way to make an application for a judge to preview the details of the case. The fact the pursuer was a company that could not have done the things in the statement of claim should have allowed the case to be dismissed without a hearing. But there seems to be no such process.

P.S. When we first started A&A, we actually had dealings with the MoD, when I worked from my garage at home. We actually had a meeting with a Major in our dining room in the house once, with my wife making cups of tea. Difference is that I did not pretend we were anything otherwise.