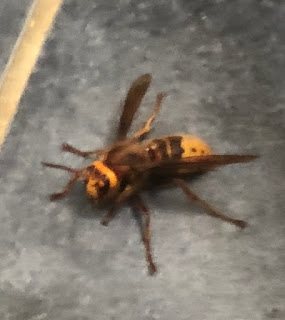 I am not a fan of wasps or hornets, though I am pretty sure I have never actually been stung.

I got a glimpse of what appears to be a huge wasp of some sort - that thing is about 2cm long! It was literally knocking stuff over crashing in to things.

My bath is actually a shower/bath and steam thing with sides, and a top and sliding doors that close completely - obviously to keep water and steam in. The doors were closed very quickly, and it does a job at keeping a wasp out, thankfully.

I ended up spending ages waiting for the damn thing to go away, or rather just go quiet, as it did, which was worrying.

Fortunately the water does not go cold very quickly when the doors are closed. Eventually I did get out, and it was walking on the floor very slowly. I think I can thank my air conditioning for making the bedroom and bathroom 20℃ for that. It was expelled out of the window - actually, my wife did that (thank you, dear).

I have no idea what it is! Some (on twitter) suggested a European hornet, some suggested Asian hornet, and someone said it may just be a normal wasp but a queen. None of those are at all appealing in any way.

So now the air vent in the ceiling is sealed with tape until I can find a fine mesh to put in it or something. If I'm found suffocated in the morning because every tiny gap to the outside has been sealed up, you'll know why.
at May 10, 2018