This is a quote from The Hitch Hiker's Guide to the galaxy trilogy (found here from Life, The Universe, and Everything).

Bistromathics is the most powerful computational force known to parascience. A major step up from the Infinite Improbability Drive, Bistromathics is a way of understanding the behavior of numbers. Just as Einstein observed that time was not an absolute, but depended on the observer's movement through space, so it was realised that numbers are not absolute, but depend on the observer's movement in restaurants.

The basic principle is that numbers behave in a totally different way in a bistro or restaurant bill, not following any of the more conventional laws of mathematics.

Whilst on holiday I managed to observe some of this for myself, and anyone that has been on an NCL cruise has probably seen it too. It really is quite amazing. Sadly I did not screenshot the bill on the app before leaving the ship, and the paper copy is in the hands of my friends, so I'll try and explain some of this from memory. Updated now I have the bills.

Things technically add up, it seems...

Firstly, and very deceptively, the bill does add up in the conventional sense. It is how the items get on the bill, why, what they mean, and how any of that relates to the package as sold, which causes the confusion.

Some clues come from the ancient runes emboldened on the room card like so... 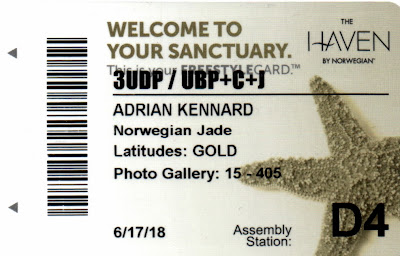 We have come to understand this to mean "Ultimate Beverage Package", plus "Coffee", plus "Juice". But that apparently has a string of restrictions, as we discovered last year. We managed not to fall foul of any of these this time.

The mystical "All inclusive" package they sell includes an "Ultimate dining package", and was on my card marked as "3UDP". We believe UDP stands for Ultimate Dining Package. However, even though the non-specialty restaurants are described as "unrivalled", it seems they are in fact rivalled on the very same ship by the "specialty" restaurants which is where the UDP comes in. It allows, in this case, for a 9 day cruise, just 3 evening meals in such specialty restaurants.

Of course, you have to know which are specialty restaurants, and the fact that when they do breakfast or lunch in the same place, that is OK and does not count.

There are also 3 of us, each with our own UDP quota of 3, and we did not all go to same restaurants all the time.

Why is this really Bistromathics?


I had already had all 3 UDP as far as I know. They showed on the account on the app with no charge on them, so easy to see and count. I had two steaks from Cagney's (room service) and one Teppanyaki. So I was all used up. These all showed on the app during the cruise, but the final bill (above) does not show any of the free items! A shame I did not screenshot the app.

Mike and Simon each had Teppanyaki twice, and Moderno, but somehow this showed as 3 Teppanyaki on Simon's account on the app and none on Mike's. It only listed the $5 on the bill (for two of them) because they gave a tip (the cruise does say it is all included but they still ask!?). So in theory all of us had used all 3 UDP, but the app did not show anything like that.

According to the accounts on the app, we had 3 UDP left on Mike's, whilst Simon and I had none left, so we went to Cagney's expecting to be able to use the 3 UDPs (yes they are transferrable within the cabin like that). However they billed the lot?

So, we queried, and they came back and said Mike and Simon had used all 3 UDP, but I had 1 left?

We gave up and left them to it - and sensibly the waiter re-billed my meal, with one main plus all of the sides, and everything else as on my account (as one of the UDPs), and billed just the two mains to Simon's account.

However, Simon's account was in credit due to a "refundable on-board credit" for $50. Once they credited the first charge and recharged he was actually owed like $4 or something.

Magically, by morning, with no explanation, or signed bill, or anything, they magically added a $10 charge to Simon's account for Cagney's so they actually charged $6.44 to his Visa card. Mike's bill had no dinners at all on it!

Adding to the fun, we told them it was Simon's birthday. It was actually last month, but last time we did this they ignored the birthday (which was while on the cruise) so I ticked the box again this time. So there was even a complementary bottle of wine (which did not show on any bill) and a cake :-)

What is a shame is that we thought we understood the system. Last time, the cabin we were in, meant they did not stick to the 3UDP, and just did not charge. For that cabin it makes no sense for them to be petty and only do 3UDP not 9UDP each to be honest and I would far rather they did that than have rules they don't always follow and nobody understands.

Basically, the app, and bill did not reflect what actually happened, and did not reflect what they said we had done. Overall we all paid a small extra amount on an "All inclusive" cruise, but not worth even trying to argue to be honest - it was "Someone Else's Problem", a clear example of an SEP field in use.

It does, however, make me wonder if Douglas Adams ever went on an NCL cruise.
at June 17, 2018