I got myself a FLIR One Pro! It attaches to my iPhone (there are different models), and has two cameras: a low res (160x120) IR and higher res (1440x1080) visible camera. It can display one or the other or a mix/overlay.

The first thing I pointed it at was a FireBrick FB2900...

This showed pretty much what I expected - most heat (and so most power usage) was the power supply units and the processor. The overlay is not perfect as it is two adjacent cameras, but pretty good. This example did not have all Ethernet in use, and did not have a working SFP, both of which will be interesting to see.

We are working on the next generation of FireBrick, and one of the key things is whether we can (like the FB2900) make a model that will work with no fan. Obviously there is a lot of work that you do just on paper and specifications first. Even with a fan it will need careful consideration of airflow. Using this will help us prototype heat sources to match the devices on the board and their proposed placement and consider air flow, and so on, for different scenarios. On the FB6000, for example, we channelled airflow over a heat sink. Being able to lift the lid and see the impact of changes can help verify the design. 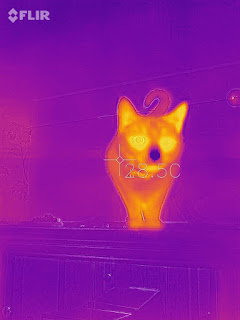 Well, it is quite fun - I looked around my study, and could see what was using power and what was not. Devices that stay hot (even if a fraction of a degree) when supposedly switched off were obviously examples that would benefit with power off at the wall. I found a phone under some stuff that was on - could see the glow on the wall behind it, and did not need to be on. I have yet to look and see how much heat escapes from the house - a night in winter is best to try that.

It can also do spot temperature measurements with multiple spots. Cats and dogs have cold noses :-)

Well, I was surprised that in a bundle of cables, you can spot the one that is actually charging something - a tiny bit warmer and so it glows.

We also tried looking at the car charging, and as you can see, the power lead glows! 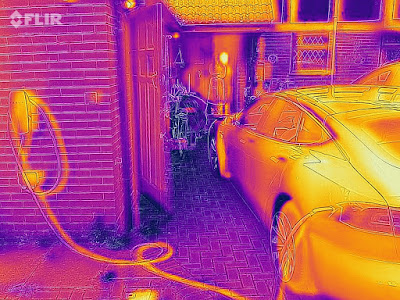 It was interesting to see the 3D printer, obviously. The bed was set to 100℃ and the image shows 99.1℃ so seems about right (the bed being on a thermostat). In this case the print head was 230℃ so shows a tad white in the image. 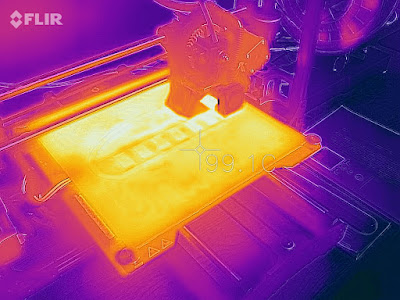 And finally, I did point at things like a cruise ship (boring) and the water at Stavanger harbour (more interesting). There were flows of water several degrees cooler than the surroundings... 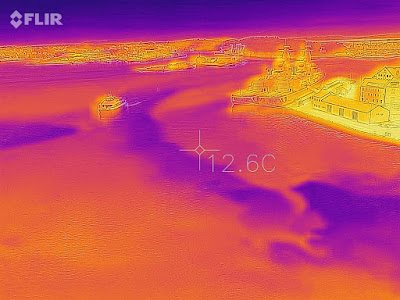