I have upgraded the aircon in my bedroom as the old one broke, and have a nice new Daikin one (as I blogged). I can control over wifi, which is good.

Even though this is way better than the old unit I had, it still suffers from a couple of problems.

Firstly, the good thing it does is finely control the power and fan so that as it gets close to target temperature it lowers the power a bit, and ends up staying on target pretty closely without oscillations. Excellent.

One problem it cannot solve though is the there will be a temperature gradient in the room, not just top to bottom, but also potentially quite a lot if you have a window open a bit to let in some fresh air and ensure the CO2 levels are sensible. Outside was actually below 0 this morning!

The other small problem is that the "auto" mode is not good at some times of year when it will wait until several degrees over target before switching.

To solve the first problem I have an SNMP thermometer with a sensor on the side of my bed where I sleep. This allows me to nicely graph the temperature for a start.

This also lets me take control of the air-con.

The first attempt involved doing the job for the aircon - setting the power based on the temperature. However, I cannot do that directly, I have to set the target temperature relative to current temperature to force it to work out a power setting. This took several iterations to get reasonably right.

At one point I was in fact oscillating so much I even had it switching to cooling after it overshot on heating, and then back again later.

But finally after a lot of testing (mostly leaving it for an hour or so on latest algorithm while I did other stuff) I got it oscillating within around ±0.5℃ or so. I was pleased, and slept on it (in a nice temperature controlled room). 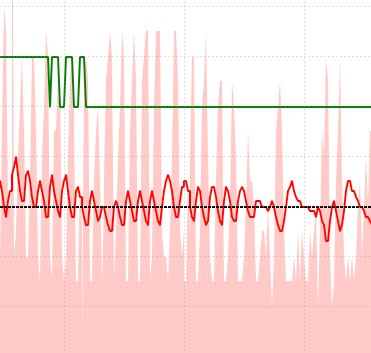 On this graph, y-axis is temp in ℃ intervals, x-axis is time in hours, black is target, red is measured temp, light red is setting temp on aircon. The green is reported temp from aircon which I suspect is a separate sensor and way off. So mostly the measured temp was within around ±0.5℃ once it had settled a bit at the start.

Then I had a brainwave..

The aircon itself does a better job, holding a much more stable temperature without much oscillation. So use that! I decided to keep a moving average of how far out the setting temperature was from the measured temperature, and use that to add an offset to the target set on the aircon. It only allows settings to 0.5℃ so I added error dither as well.

This works a treat, and allows me to set the aircon allowing for the temperature gradient in the room automatically. The only minor change I made was to offset the averages by a few minutes to allow for the fact that the set temperature does not immediately change the room temperature - so as to better track the actual temperature difference. I was somewhat fooled by how much it changed during the day when sun light hit the room, etc, but I should have expected that. 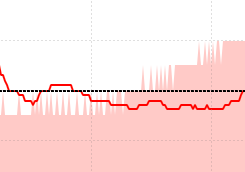 Here, by using the aircon to control the level we have a smoother temperature. This was in the evening as the outside temperature dropped and so the level to which the aircon had to be set was gradually increased to maintain the measured temperature. Again, within 0.5℃.

The result is all on GitHub (here). It includes MQTT daemon as well (which is how I tell it the air temp from SNMP).

Update: This worked well when the aircon is fighting a window that is ajar. Now I have my new fans installed and windows slows it is oscillating ±1℃, because it is effectively turning on and off at a low level. So I am working on the older method if I find we are doing that. We'll see how it goes. Github updated as I go.
at April 03, 2019