Discussion: Not an Elechouse PN532 board 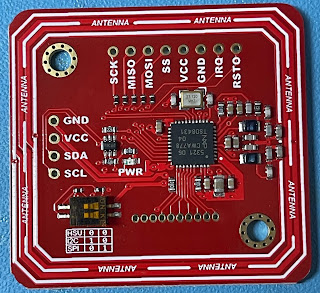 A company called Elechouse make a PN532 RFID reader board.

There are actually a few PN532 boards available, but the Elechouse one seems to be the most popular. Annoyingly, it seems that there are a lot of cheap copies that don't work as well. It has a number of advantages over the alternatives, mainly (I think) its compact design.

The actual circuit is basically the PN532 reference design from the datasheet.

However, there are a few niggles I have with it where I have used it in projects. My main use case was where this is the external module on an access control system, in a small case. The main issue was it lacked any feedback (e.g. LEDs). I worked around this by using its internal GPIO pins to work a red/green LED, and a tamper switch.

So I was thinking, I could make my own board. The issue for a home made board is soldering the PN532 itself, but I have been practising and am reasonably confident that with a hot air gun I can manage it. The result would be an open source PCB that can be home made. Obviously it could be properly made with pick and place and sold as well.

I am concerned over "feature creep" in such a design, and even just pondering it for a few minutes I am already seeing ways I could be improved on. Thankfully a lot of features could be "optional fit" on the PCB, basically adding no cost when not needed.

But I am in two minds over making this - it will not take too long to design and have made, but may need some tinkering to ensure I have the antenna matching right (and I may even need help with that). Before I start, I am interested in feedback, especially from anyone that may think they would like to use it themselves.

So here are my design thoughts.

Obviously I can include some 3D case designs too.

But I am interested in feedback - would you use such a board? Would you make one yourself if I do this (all open source)? Would you need other features? Would you take away any features I have suggested?

P.S. This is the sort of idea... Though obviously this shows multiple connectors when you would only use one. This idea is any of the connectors, switch, and LEDs could go either side as required. OK I have ordered these... 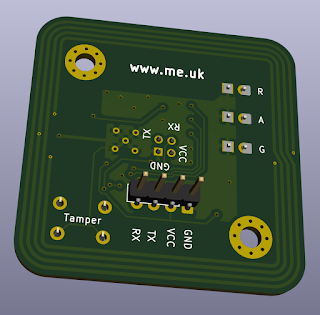 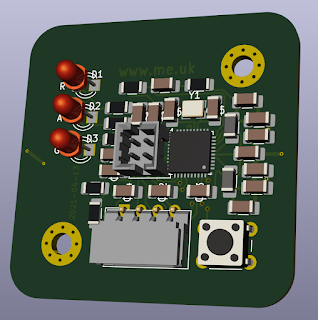 P.P.S. Err, it works. OK one of the LEDs does not, as on P34, which I just cannot get to be GPIO for some reason, and the crystal pin out was wrong, but it actually talks NFC!!!! I am gob smacked. More in a later blog.