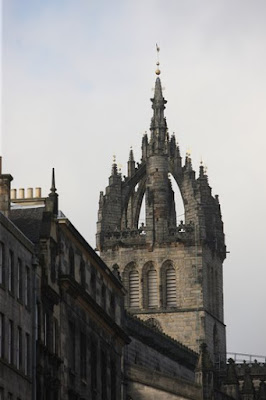 Edinburgh is an interesting place - not been there for 20 years or so. Two of us walking around the place using an iPad with GPS/maps. Only catch is the maps are 2D and Edinburgh is, well, 3D.

There is one road we had to traverse several times for the meal, the venue, and drinks and hotel and so on. The road is called South Bridge (yes, I know, the clue is in the name). When on the road, it looks like a normal road with tall (3 or 4 story) old buildings both sides. Some roads join/cross it as you would expect. Nice long straight road.

However, if you try following a map that is effectively saying "turn right" and actually means "fly 10m in the air and turn right" you realise that South Bridge appears to be one long bridge. Yes, some roads meet it, but many go under it. The houses that looked like 3 or 4 stories are in fact 7 stories.

We got the hang of it in the end and it is a very nice place.

After the event and after the drinks in a club that was laid on, we then ended up in a nice Mexican restaurant, and finally in a whisky bar with what can best be described as "The elders of the internet". Cliff Stanford was there as well as other people that were around when Demon first started. A fun evening.
at September 09, 2010