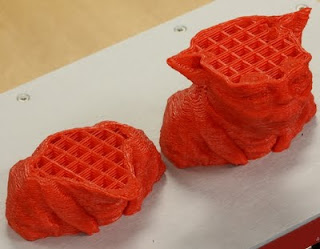 Someone suggested I try Yoda on my new slicer. Took around 40 seconds to process.

This allowed me to test my latest trick which I have been incorporating in to my slicer. It is a way to eliminate the "bobbles" on the surface. These happen when you start extruding on the perimeter loop (the outer edge of each layer). When you start the loop some extra plastic comes out because it has been oozing slightly on the travel to the start. This leaves a small bobble (lump of plastic) on the surface. There are useful tricks to minimize this by withdrawing the plastic a bit, moving and then pushing it back, but even that leaves a bobble. Skeinforge has a jitter option to change the start point so that you don't get a sort of seam down the print where it starts each layer, but that does not eliminate the problem. 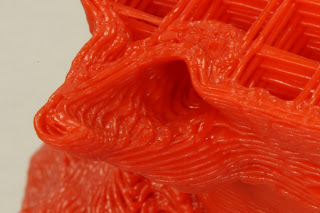 My cunning plan is it print two (or more) perimeter loops (quite common, to give the outer layer more strength), but ensure you print the inner one immediately followed by the outer without stopping. This means the outer loop starts as a continuation of the inner loop and so has no bobble at all. This seems to work perfectly! Yoda has smooth skin as a result?!?

So, why sliced Yodas? Not migraines this time! First was simply my impatience. I told repsnapper to send the print before it had finished loading it all, so after half an hour it proclaimed it had finished when barely at his chin... Second was more subtle. The Yoda has eyeballs in the STL file so this meant a lot more plastic going down and as I said I have not done the code to avoid too much plastic where loops touch/overlap. The effect was downward pressure (force?) causing Yoda to come off the base. The anchor was not good enough (it stayed put and Yoda came unglued). My plan is to improve the anchor (stuck to base of print better) and try again.

Anyway, all in github now, under RevK/E3D.