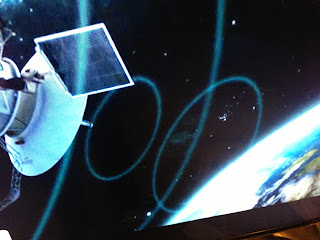 "In the very near future, someone, somewhere, will purchase a chocolate bar. The bar will be equipped with a GPS signalling device. When activated it will beam a signal in to space, bounce off a satellite, and return to Earth. This will alert a secret control room who will scramble a crack team of highly trained individuals. They will board a helicopter, find the special bar, and give the owner £10,000. Cue girly scream. Find a special GPS bar of KitKat, Aero, or Yorkie, and we will find you with £10,000."

That is not how GPS works. GPS receivers get signals from satellites, several of them, and use these to work out where they are. Any signalling of the location of the bar will not involve the bar or GPS signalling device sending a signal in to space. There is no chance that a small GPS tracking device in a chocolate bar will be doing that. At best it will signal using mobile data.

Now, there are adverts where what they state is clearly fiction, which is fine. The problem with adverts like this is that they are not obviously fiction, they are stating something that just re-enforces peoples misunderstandings. Why do that? Does it make the offer sound even better somehow? Do we not have rules against lies in adverts? It is annoying.

If I find one, I may have to take a holiday somewhere with no mobile signal, and then activate it, so see if they meet the 24 hour time they put in their T&Cs. After all, if the advert were true, that would not matter, would it?

I may be wrong! It is true that (a) GPS trackers normally work as I have described above: with a GPS receiver and a mobile data module, and (b) that there is an annoying common misconception that GPS receivers somehow send a signal in to space. However, they may have been extra clever here in making an advert that annoys people like me, that are fed up explaining this to people - if so, I am impressed, and my blog post has helped spread their advert as they intended, well done!

As some people have pointed out to me - there are in fact some devices that do signal to a satellite. Suddenly it makes sense, as these things are intended as SOS devices for people that go mountaineering and the like so they can get help wherever they are. What also makes sense is the helicopters, as that is exactly what these services would do to rescue such a person. It sounds like maybe they are using such a service, perhaps to show off the service itself in a followup advert when someone has won. Even so, I will be surprised if somehow they fit such a device in a chocolate bar!

Re-reading the wording, it is interesting for the cynical. Normally the advert is worded such that you are now buying something that has a chance of winning a prize - like a lottery scratch card. However, it starts "In the very near future, someone, somewhere, will purchase a chocolate bar. The bar will be equipped with a GPS signalling device...". They are not actually saying there are in fact such bars now are they, just that "In the very near future...". So maybe they have not released them just yet.

I also seriously doubt a satellite signalling device would fit in the weight of an Aero bar, let alone the size, thereby making it very easy to find without opening the bar.
Posted by RevK at 14:39:00