Silverstone went well. We took all the staff that wanted to go (which was pretty much all of them). Fun event for all. Although I don't recommend walking around the whole track in the sun with no hat - my head is killing me (sun burn). I think everyone enjoyed it.

The company that sold it to us have still not refunded the phantom booking fee they agreed to refund, and re-reading their original description of the event it was a far cry from a "private suit" at Silverstone. My overall opinion is we did not get good value for money. That is to say we paid far too much for what we got, not that what we got was not a fun day for all.

It is actually the first time I have done Silverstone. We had some fairly good grandstand tickets. National Pit Straight, not the start/finish line, sadly, but a good place to see some over taking. 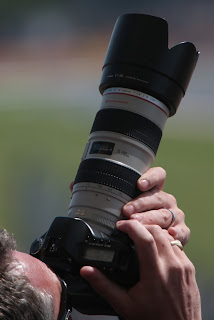 The camera worked well. I was not the only one with a 70-200 L USM lens, as you can see. It was a toss up whether to use the x2 or not. I ended up using it for many of the shots. In that light, 140-400mm f/5.6 was fine for getting fast shots. I settled on 1/800th second for most shots as they showed some motion blur on tyres, but were quite crisp. The IS worked even with slower shots. Going to 1/8000th second the cars look stationary, as you would expect. My main gripe is that even with the on-screen zoom on the camera it is hard to be sure which settings are getting the best shots, and taking a laptop to the grandstand was not on, obviously. The tracking auto focus on the 1Dx worked well too. I am pleased with the end result, over 1,000 shots including some of the red arrows display at the start. 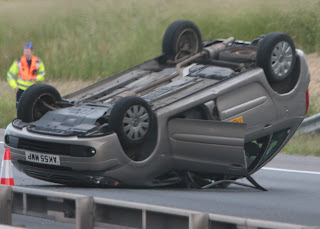 We did not see any crashes, which is good... well, not until we had spent ages in a massive queue of traffic on the way back which was entirely down to people looking at a crash on the other side of the road (did not look like anyone was hurt).
at July 01, 2013