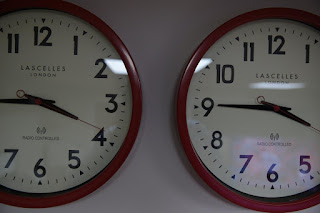 Last year we discovered that engineers were calling 123 to "test" a line. Alex blogged on the matter.

What he discovered was that a Kelly engineer was trying to find a spare pair on a DP. He would connect his test phone to each pair to find one that is not in use. If one had dial tone he would try 123 to see if it connects as it could be a stopped line. If it connects then the line is "live" and so he would have to go on to try another pair.

In that specific instance the engineer found Alex's line which has OCB (Outgoing Call Barring) so did not allow calls to 123. The engineer stole the pair for another install.

We have heard from other telcos that set up lines with no dial tone, and they say that they regularly fine such pairs "stolen" as they appear to be "dead" lines. This is partly why we have dial tone. These days we also add a message stating it is a broadband only pair and not to be disconnected, which usually works.

The problem with calling 123 on several lines to find a spare pair is that you end up causing a fraudulent charge of around 30p for the call to 123 on each of those lines.

At the time, as I understand it, BT and Kelly assured us that this is not normal practice.

However, this month we have found evidence that this still happens. Customers have mystery charges to 123 on their bills. These are customers that do not even have a telephone connected to the line as it is provided for broadband only. So the most likely explanation is an engineer testing the line with a call to 123.

What is stranger is that the lines in question do have OCB enabled, and so a call to 123 should not have worked. One of them is even set up with our message (using "Direct Connect") and so does not even have a proper dial tone or a means to call 123. This suggests BT have a more serious problem of allowing calls on lines with outgoing barring enabled, or some serious billing system errors causing calls to be put on the wrong line!

We've asked BT to investigate - all we have had back so far is "Perhaps someone deactivated it? Not sure OCB blocks 123 either (speaking clock)" which is pretty poor for our BT account manager.

If this is a systematic problem, or problems, it could be making BT thousands in fraudulent calls.
Posted by RevK at 15:49:00