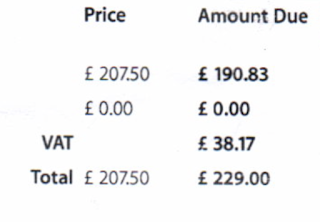 Rather annoyingly I smashed my iPad mini coming back from the beer festival. I dropped it about 4 times, and only when I finally got home did I finally manage to smash it on my driveway. Gutted.

As James now works in Reading I asked him to pop in to the Apple store for me. They said they replace them now at discounted price, and would have to order one. They said it would be £207.50 and handed him the quote.

Turns out the quote has the rather odd mathematics as shown on the right whereby the price is £207.50 (as advised) but somehow it makes a total amount due of £229.00!

Well, it turns out that it is actually £249.00. Yes, that is what they actually charged the card for the new iPad. James did not notice until he got home.

This sort of mathematics would have made Douglas Adams proud.
at May 19, 2016