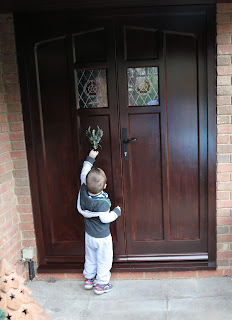 Having done the garage conversion, Sanda went a bit mad on doing up the house, including renewing all of the double glazing in a dark brown instead of white.

But she wanted a new front door, a proper one.

We asked a local firm to quote for a solid wood door, and they came up with a figure and some pictures. It was a tad pricey.

But one of the doors in the pictures looked exactly what Sandra wanted. However, I had a moment of inspiration and did a google image search for the door she liked from the image in the quote.

I found the image they had sent had in fact been lifted from someone else's web site! What a cheek...

I contacted the company that actually made the door, Taylor Made Joinery Ltd, and their quote for the same door was about two thirds of the price. They even had custom leading on the glass done for the windows.

Anyway, they installed it today. Couple of minor snags. Sandra went for the multipoint locking mechanism rather than the electric locks, which is a shame. I have some more ABS lock cylinders coming tomorrow as it comes with cheap locks.

But, overall, it was an exact fit. The fitter did a good job, and properly screwed it in to the brickwork (with screws behind the hinges so no wood plugs in the frame). Interestingly the old double glazing unit was stuck in with expanding foam, and that was it. A good pull would have taken it out of the brickwork altogether!
at May 17, 2016