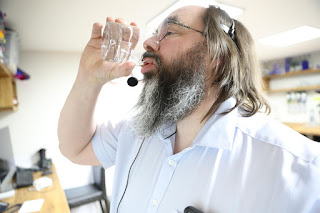 I went through the iTunes email based support, took ages, and no help.

So I called 08001076285, as they suggested, to get support. It is a horrid voice based IVR thing. So I have to say my serial number the first time. This time I said my case number.

Oddly, they are actually very pleasant, so well done on that. I have a dread of calling any tech support normally. I hope our (A&A) tech support does not create the same sense of dread for customers. We have no call gate!

On the first call I explained the issue, and what I had tried. Eventually they suggested one thing I had not ("restoring" via iTunes and a cable). So I have done that now, and hence another call.

I am tempted to publish the call recordings (and annoying hold music). I will have to change my security questions first :-)

Basically, I have tried everything so far...

They think "something somewhere is asking for an iCloud password, or something" and that is upsetting it.

I removed all devices from my apple ID already, if this is what it is that is mad. I have just logged in to two iMacs and set new passwords. If that solves it Apple are fucking stupid! No way a third party failed login attempt should break my Apple TV. Just broken logic there Apple!!!

P.S. If this works I should do a more controlled test - what if someone just used my apple ID and wrong password, would that break it? If so Apple really are broken!
Posted by RevK at 18:58:00