Thanks for the feedback on the last blog post.

I agree, it looked way too ghosty, and I have finally worked out why.

You use Motion to create a Final Cut Title. 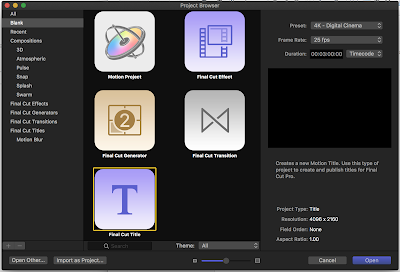 You then do a few simple steps:-


Some experimentation confirms what I understood. I am applying this to a sped up video. In my case 60x normal speed. So I set 60 samples and 360° shutter. What this does is for each frame of output it merges all 60 frames of original creating a smooth motion blur effect in that one frame the same as if this was actually a 60/25 (2.4s) second exposure for that one frame. This is the effect I actually wanted.

So what did I do wrong?

Firstly the various tutorial videos say the duration of the title effect does not matter, so I made a 10 second (the default) duration effect. I placed it over my (sped up) video, and stretched to fit (in this case, 3 minutes).

What I did not realise is that stretching the effect meant that it stretched the sampling. Each output frame was indeed merged from 60 input frames, but the sampling time period had been stretched 18 times, meaning that it spread over not 2.4 seconds of original (which makes one 1/25th second output frame) but over 43 seconds of original, moving 2.4 seconds forward each frame. Hence the rather odd ghosting effect.

The solution was to make an effect that was 3 minutes long and not to stretch it!

Is there another way?

One of the tutorial videos said to set the effect to loop one frame before its end. Presumably to make a 10 second effect, that when stretched, did not stretch the sampling.

It worked for the 1st 10 seconds, but unfortunately this simply meant the video looped every 10 seconds.

Maybe there is some other setting to define the way the title effect works when stretched, I may have a play.

How did it look?

Here are the three videos again.