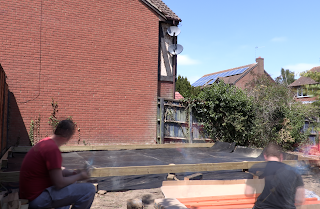 I have a slight dilemma with my new camera. It can record for about two hours because (a) the 256G card I have records about that and (b) the battery lasts about that long.

So, if I want a time lapse I have to change battery every 2 hours or so anyway, so may as well change memory card. Hence not a lot of point in recording in "time lapse" in the first place unless I can connect some mains power to the camera. There may be cases where that is sensible and the time lapse feature in the camera makes sense.

However, for now, I figured I may as well record in real time, and then make a time lapse in Final Cut Pro. It is very simple to tell it to speed up a clip.

There is a down side, the time it takes to transfer and process 256GB of data at a time, and so on. However, I think Final Cut Pro could do a better job than the simple time lapse.

The first thing that occurred to me is that the time lapse would be good if it did a proper "motion blur" on the images. So if I am doing 60x time lapse, process 60 frames to make a motion blur for each frame.

It turns out that whilst this is not a native feature of Final Cut Pro, it is a feature of the titling functions. So by buying the "Motion" system, and creating a text title with no text in it and set to do motion blur as a feature, I can overlay that on the sped up video. Yes, it is complicate to make it (and you can google for videos of how to do it), but it works.

Down side it that it takes a while, well, especially if you do 60 samples at 60x speed like I am. It takes a very long time! I need a faster machine (roll on December, Apple).

But the result is impressive.

So first the non motion blur video - which is as you might expect - still very good :-

And now the motion blur version :-

As you can see, quite a difference. It makes for a very different time lapse, and looks ghosty - see next post for the fix!

So, when the do eventually start building the actual climbing frame, etc, I should be able to make a nice time lapse.
at June 17, 2017