DO NOT USE DHL THEY TELL TOTAL LIES (wav)

We called them Thursday and said we needed a parcel next day to Lindos and they said "express" would do that. We took parcel to depot by their deadline and they took it and did not say it would not be next day. Their web site says next day. Everything says next day.

Now they have not done next day (would be Friday). They handed to local courier in Athens on Friday at 14:09. They insist will be here by 17:30 Monday. Well at one point they say 24 hours (which would be 14:09 Saturday, so another lie). It is not until after they fail to deliver next day that they claim Lindos is a "+1" location, so not in fact next day at all.

Now (Monday) they say that local courier has it on a ship and might be Tuesday.

Just do not ever ever deal with these people. No not use DHL. They LIE to you.

I am now claiming that if my camera is not here by 17:30 then it is lost and I want my full insurance claim on it so I can get a new one.

Basically, it is looking like it may not even arrive before I leave Greece now.

LIERS DHL LIERS - CRIMINALLY FRAUDULENT LIERS... There is no other way to put it. They lied to get my business.

Update: We have explained that the contract is void as was based on a lie. I said that at this point we are seeking compensation for simple criminal fraud. They got business based on lies and now are continuing to lie. If they get to me by 17:30 today we will settle for simple refund. If not, I file a CC claim for compensation for their criminal activities including all consequential losses. This is just not acceptable. I am not sure the message is getting through somehow. Lets see.

Update: Fucking cheek. They (DHL) called, and said it was in Rhodos (an hour drive away) and missed for today, but if I call the local courier I could make a special for today. I explained to DHL that I paid for today (actually I paid for Friday) so if it is possible for today then they can call and arrange a special at their expense as I have already paid for today! I then hung up before they could argue. We will see. Best outcome is 17:31 delivery so we claim money back.

Update: Basically, DHL Athens are saying Lindos is a "+3" destination, i.e. their "Express" next day service is 4 working days. How the hell is that ever next day. Their web site talks of next possible business day. Well I can prove next day is possible, give me a package in London and I can get it to Lindos next day, and I don't even have a fleet of DHL planes, I would just fly Gatwick to Rhodes direct and taxi from Rhodes to Lindos. Could be done in about 6 hours if you are lucky.

Tuesday: We'll see if it arrives today. I fly back tomorrow. I need to review all the call recordings once more before we issue a county court claim. At the very least we should be contacting trading standards over this as they simply should not describe the service as "Next day" if it is not. They do not even have a asterisk with "* Some locations may be up to 4 working days" or some such! It is misleading advertising.

Update: ETA 12:30 Tuesday, 5 days after it was shipped next day from London.

Update: Just before 11:00 local time Tuesday, I have my camera and lens and memory card, it is all well packaged still, no dents, and works a treat. More on 1Dx when I have had a play with it.

And yes, DHL handed to SpeedEx who drove up in a FedEx van...
No signature, just handed to a bloke in the street (which happened to be me).
Odd how DHL claim it was signed for. I may ask for a copy, as just yet more fraud. 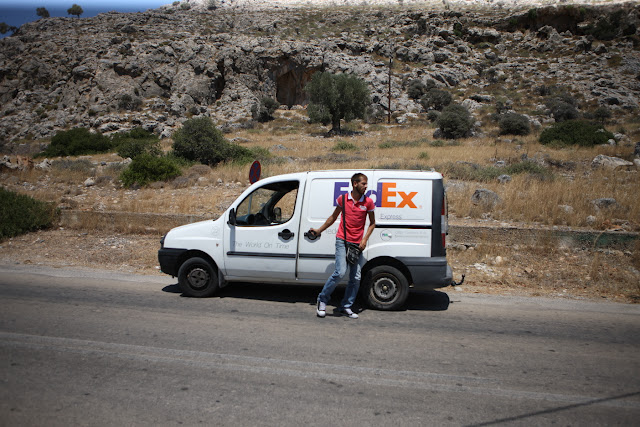