In light of my recent blog posts it is about time I was a bit less ranty and a tad more educational, so I decided to try and explain why fibre is important when talking about "fibre optic broadband". 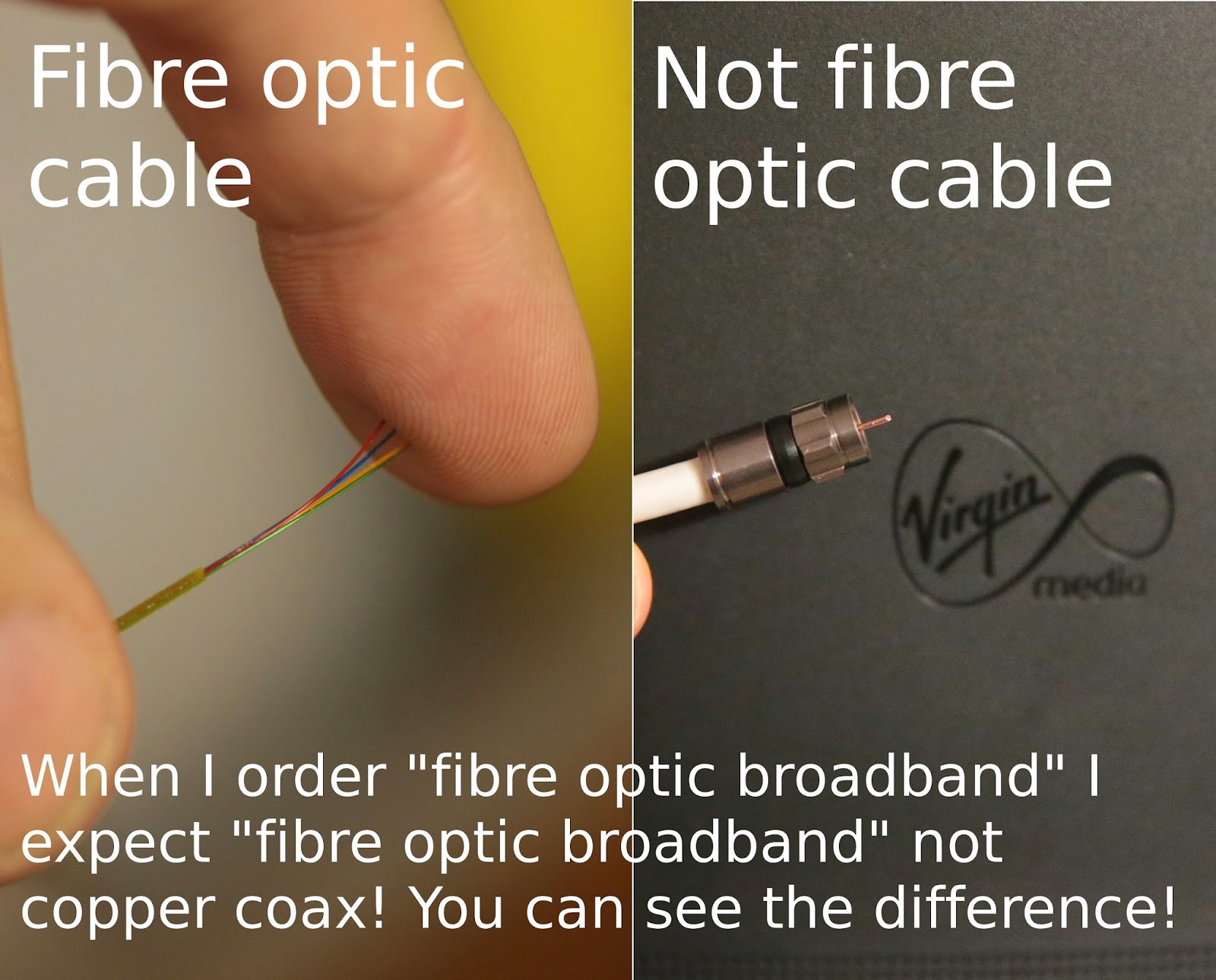 Virgin's explanation of copper being bad and fibre being good talks of your broadband slowing down as it gets further from the exchange (using copper). This is not a bad start to explaining it, but I think I can do a little better.

When we are talking about an Internet connection it means computers passing digital signals over the distance between you and somewhere else in the world (e.g. a web server). Whilst you might see web pages, emails, pictures or movies, it all boils down to ones and zeros carrier over some form of communications link.

There are two main physical communications link that are used (we're not really considering radio / WiFi at this point). The two types of link are copper or fibre.

The picture above shows the two -

The copper is metal, shiny orange-ish metal that conducts electricity. As you know, metal can carry electrical signals. In this picture you see coaxial cable, it means there is a thick copper wire in the middle, an insulation around it, and then a wire mesh around that, which the white plastic around that. This is one common means of carrying electrical signals. The other common means twisted pairs which is two wires, insulated and twisted around each other. These are often with other pairs in a protective outer coating, and usually are colour coded to identify which pair is which.

The fibre looks thin and what you can see in the picture if 4 colours strands. In actual fact that is four glass fibres which themselves consist of an inner and outer layer of glass, and then a protective coating and a colour coding so you can tell which is which of the four, on the left you can see that is all within a further protective coating, and the whole lot goes in plastic tubing. This is one typical way of handling fibre.

Obviously both of these come in various styles. You can get extra thick cooper coax cable for going long distances. You can get different grades of fibre, and they can come in different protective coatings. There are fibres under the sea that need armour coating to avoid damage.

So, it comes down to how these different communications systems carry the digital signals.

When we talk of speed, that si a tad deceptive. The speed of signals is different. The fibre is literally the speed of light (in glass). The copper is a little slower. But that is not actually what concerns you - what matters is the data rate. This is how many bits of digital signal can be carrier per second. So we talk of megabits per second (millions of bits a second) and gigabits per second (billions of bits) and so on. That is what most people think of as "speed" when talking of Internet connections.

Fibre uses light, in fact it uses lasers. The light is not usually visible, and can actually be lots of different frequencies (colours) of light all mixed together in a signal fibre. There are some clever ways to get more signals down a fibre, but even the simplest, which is a single laser that flashes on and off for the ones and zeros, is very reliable and very fast. Whilst the light does get dimmer over distance, the light can go a very long way without any sort of repeater or amplifier and the light can flash very fast allowing very high rates for sending data. It is kind of intuitive that light can go a long way - just look up at the stars and think about it.

Copper, on the other hand, uses electrical signals. These work very well over short distances, and are used for most networking - the cat-5 cables you may see use 4 twisted pairs of copper, and work up to 100m. But making copper carry signals any longer is harder work. There are clever tricks (such as ADSL) for getting signals to go for miles - but the data rates are lower for the longer cables. It is not that the signals slow down as such, but that what you can achieve - how much data per second you can send - is lower on longer lines.

For a copper pair, or coax, going 100m can allow quite respectible data rates. A 100m cat5e cable can easily handle a gigabit per second, and do so very reliably. But going further is hard work, and if you went 10km you would be lucky to get one megabit per second on a copper pair using ADSL.

For a fibre you can easily go 10km, and in fact fibre will quite happily do speeds of gigabits per second at distances of 70km. With more modern systems and multiple lasers a fibre cable can carry terabits per second. So, the distance from an exchange to your home, even if that is 10km, would easily be able to do 10 gigabits with relatively simple equipment these days.

Most of the Internet involves fibres. Any link between any two places that is more than around 100m will almost certainly be fibre (there are point to point microwave links and satellite links in some cases). Often, in equipment racks, the links between equipment, going a few metres, will be copper network patch leads, but even these will sometimes be fibre.

There are tricks done by BT, Virgin, and others. These are to get the fibre that bit closer - some times within a few hundred meters - by having fibre to a street cabinet. That means the last bit is much improved even using copper, but it is still massively different to using fibre.

Fibre to the cabinet and coax or twisted from the cabinet for the last bit can get speeds at a few 100 megabits if you are close. If you truly had a fibre from the exchange all the way to your home then that could ultimately handle terabits (not that any ISP could afford to sell such a service yet).

There is another factor with fibre vs copper. Whilst glass may seam fragile, it gets well protected, but copper suffers from some other problems which don't affect fibre. Copper can pick up radio interference from thin air, be subject to nearby lightening strikes, and get corrosion of joints. Fibre, on the other hand, just works, and short of someone putting their JCB through it, it will stay working pretty much forever.