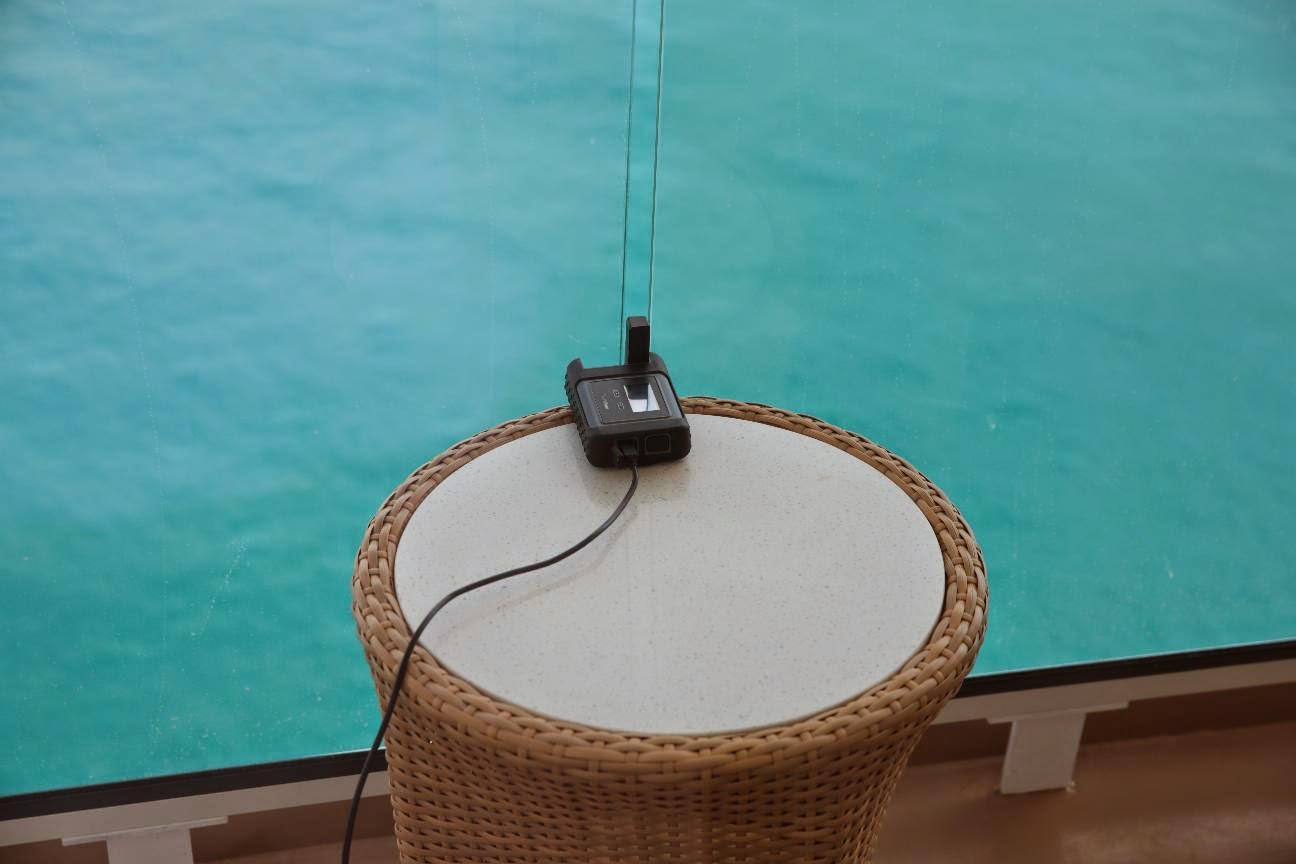 So, a few days at sea. We are now at the second port of call, St Thomas. Yesterday was St Maarten. Fun little islands. Loads of pictures today from a sight seeing tour. I'll upload pics when I get back for obvious reasons.

There have been a few discoveries re the Internet though.

First, the Iridium Go! - which works well for tracking my location with 5 minute GPS updates. I'll collate the data on to a nice map for the whole trip once I get back, but it is cool that it works. This is simply on the cabin balcony 24/7.

However, I did take it up on to the sun deck on Monday. We are in an exclusive little area (expensive tickets) and so not at all crowded. Very different to the Sponge Bob deck (where the muggles all go) which is packed. I put the Iridium Go! on top of something high up - where it could see almost totally uninterrupted horizon to horizon view of the sky - so perfect for satellite use.

It worked very well - it tracked satellites and stayed in a data call (albeit at 2400bps) for ages. It did fail at one point, and refused to reconnect for several minutes, but mostly it was just working. It made ssh/irc very usable. I was very impressed with compressed ssh actually - the screen refresh when switching tabs on irssi was instant, suggesting it was compressed to one packet (using 576 MTU). It is all plain text, so plausible, but it made irssi very usable. The problem was, even in the shade, that it was hot and windy up on deck, so I eventually gave up. Sadly on the balcony, with only a half view of sky, it will drop data calls every few minutes. It drops NAT sessions (which is a really pain) so means a new connect which takes ssh around a minute. Hence not really very usable from the cabin, which is a real shame.

However, the ship's Internet has some interesting quirks. On this ship it is only done using per-minute packages, not per MB. I was able to buy 250 mins for $100. You connect and disconnect as you wish. They use minute based start and stop times so you can end up paying for up to an extra minute each time you connect, which is a bugger. Interestingly, when in port, they clearly use a local land link as latency drops to something sensible. At sea it seems to be Inmarsat, so good speeds but high latency.

They also hijack logout.com and mycounter.com, which I assume they do not own, as well as IP address 1.1.1.1 which is also not theirs. Obviously no IPv6! If only I owned logout.com I could kick up a stink :-)

However, I have left the most useful quirk to the end. This has to be deliberate, but does not seem to be documented. If I connect to the ship's Internet, and then disconnect, it seems that the Apple push notification systems stay connected and not charged. This means notifies for apps like Facebook messenger, and twitter pop up (even though twitter does not connect). I even get incoming FaceTime calls and can make them but not actually connect the call sadly. Usefully iMessage continues to work, both ways.

I checked, and it is not simply a matter of open TCP sessions staying up (shame). It is not even a matter of port 5223 staying up (as I tried that, mapping for ssh). Hence, I can only assume it is intentional. But the result is I have working text iMessage at no extra cost 24/7, which is cool. Note that images in iMessage appear to be done by reference to something via another port, and so that does not connect, so only text works, but still...

I am still battling with the mobile carrier to get our SIP2SIM service working on these islands, USA, and ship's GSM network. I am able to connect and get inbound texts (no idea on calls as thankfully nobody has tried calling me yet), but I cannot make calls, send texts or connect on data. I know the costs are scary, so would be doing only to test (as some customers would really like this to work). But hopefully my testing and reporting back will get it solved. It looks like a soft problem (tariffing config) so should be solvable while I am here.

Apart from that - the holiday is going OK - I will have to blog on what a cruise is like, having never done one before - it is quite an experience, though I understand cruise ships do vary from ship to ship. We do seem to be following the Disney ship though :-)
at September 24, 2014