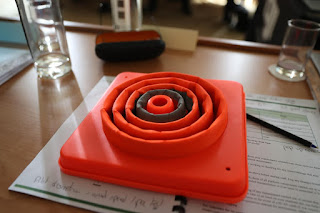 Today we covered more on weather, and operational manuals, and some details of the practical flight test.

One of the key things for the PFAW (Permission for Aerial Works) is that we have to produce an operational manual. This includes a volume (1) on the company and the work we will be doing and our various procedures for operation and risk management, etc. A volume (2) on the technical details of the aircraft. And finally, optionally, a volume (3) making the operational safety case for extra permissions, if we need them, such as working closer to people and buildings in congested areas. Volume 3 is tricky to get and may require showing some operating experience, so we are not going to do that yet. Some time next year we expect rules to be relaxed in various areas anyway so may not be necessary.

I have to say that it has not been 100% clear what the course gets us, so it is worth explaining in a little more detail...

What do you get from a CAA PFAW course?

The PFAW is something the company gets, and can then engage pilots that have passed the theory and practical tests. Obviously a lone operator can get the PFAW themselves and be the pilot. Hopefully we (Alex and myself) pass the theory tomorrow, then come back in a few weeks for the practical. Once we have our operational manual we can apply for the PFAW for the company.

Without the PFAW there are rules for small unmanned surveillance aircraft (SUSA), and for a congested area these are quite strict - not over or within 150m of a congested area! Also not within 50m of a person or structure not under our control (30m during take off or landing).

Given that a congested area covers anywhere built up in a town or city or settlement (anywhere that is substantially used for residential, industrial, commercial or recreational purposes) that pretty much rules out getting close to anywhere in a town or city or settlement. Even with permission of all of the home owners near me, I could not fly up by my house as I live in a residential area!

What we get with the PFAW is a basic or standard permission: "The standard CAA permission for SUA/SUSA in the 7 kg or less category allows flight in congested areas to within 50 metres of persons, structures etc. (or within 30 metres if the persons are under the control of the person in charge of the aircraft). This category of SUA/SUSA cannot fly within 150 metres of open-air assemblies of 1,000 people or more where only a standard permission has been granted."

The 50m/30m may not be an issue, assuming, as we are, that it is a straight line from aircraft, as one can take off to over 30m height, and then be close (horizontally) to my house or neighbours houses yet outside these distance limits because of height. There may be a slight issue with finding somewhere to validly take off or land. It will be interesting to see what a PFAW says about that though.

One question that came up on the course, and the answer was not 100% confident (sorry heliguy), was that these distances are 3D, i.e. "piece of string", distances. From aircraft at height to the object/person. So if allowed no closer than 50m that could be achieved by being 1m away horizontally and 50m up. Pythagoras do your worst. This is confirmed by a phrase in IN-2014/190 and CAP 722: "In any circumstances or weight category, it should be noted that flights directly overhead persons and vehicles will not be allowed at any height in a congested area unless they are under the control of the person in charge of the aircraft.". The fact they have to say this means clearly that the height is a factor in the distance calculation, i.e. we could fly 30m over our heads (if in our control). Good news, though I may need to buy some hard hats to mitigate risks.

Update: CAA have confirmed that these distance rules really do work as a direct 3D line, so height is part of that.

Getting these distances reduced is what takes a lot more work and an operational safety cases in volume 3 of the operational manual. However, the fact that the height is a factor means I should be able to fly high enough to avoid the need to get permission from my neighbours to take aerial shots of my house, and can even fly over my house (at least 30m above - though it is a structure not a person so maybe closer is actually allowed) as I control it. This is once I get the PFAW. Indeed, the documentation does say that this basic permission will be suitable for video of properties, filming, etc.

I do think heliguy should have had a slide right at the start stating clearly the rules without PFAW and the rules with PFAW - a clear indication of what you are getting by doing this course. It was not obvious to me, or others on the course, until just now that for under 7kg the basic PFAW allowed work in congested areas. I'll give them feedback on the final day tomorrow.

Before I do the practical I will need a bit of practice. The test involves a few basic flying manoeuvres, but as I have had exactly 20 minutes total flight time so far, I am not quite up to them yet. So where can I practice?

One possibility would be a field, with permission from the owner, and not somewhere the public are likely to access (and not near power lines or flight paths, etc, etc).

But one interesting possibility is the office car park, at a weekend!

There are two ways to do this - one is pretty clear cut and involves removing or disabling the camera so I only come under the non-surveillance rules. Then there is no issue as it is clearly "safe" on a weekend, with nobody else around.

The other is more creative, and I am trying to find a reference for this. But the idea is simple. The definition for that area to be a congested area would mean it has to be substantially used for industrial use. Well, the argument is, that, at the weekend, it is not. All of the offices and work units are all closed at the weekend and nobody is around!

The formal definition does not say! It would be an interpretation to say "right now" this is not a congested area. It was suggested by one of the trainers, so hopefully is valid. One way to be reasonably sure may be to actually ask the CAA. I am not sure I want to open that particular can of worms right now though. Some have suggested that this rule is not time specific, but ultimately it has to be - if you build a housing estate it will, at a point in time, change from non congested to congested - so time has to be a factor - so why not time of days or hours?

What I can be pretty sure of is that it would be safe, especially if I am doing it personally as a private flight, covered by MBFA membership insurance. I'll get permission of the neighbouring units within 50m so I have "control" of the buildings, and have someone watch out for vehicles or people approaching (unlikely). With any luck this will give me somewhere to practice.

Not this weekend though, as I have my wedding blessing to go to. Oooh, look, it is in a castle in the middle of nowhere (not a town or city or settlement). That could be handy :-)