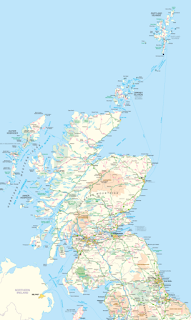 As usual, I am not offering political views as such on the EU issue, but pondering the process and rules.

It seems Scotland and Northern Ireland may both be interested in staying in the EU. It seems some in the EU are not keen. It seems that either of them breaking off from the UK would then be stuck applying like any other country to join the EU.

However, things are not as simple as when considering a legal entity in a contract. I mean, what is the UK as a party to these international treaties exactly? How is a country defined? After all, they change all the time in subtle ways.

So thought experiments:
Maybe that is far fetched, but let's try a few more...
Really, how does it work, and who actually decides? All of the above scenarios are, in theory, no concern of the EU, as they are internal to the various countries (unless EU treaties already contain rules on merging with new countries or splitting).

If I was the SNP I would be asking these questions in all seriousness though.

After all, if Scotland was allowed to “join” Ireland as an EU member, they could operate a “devolved government” system which basically means they are only there for the green card, I mean EU membership, and not really in bed with each other.
at June 29, 2016