The death of the land line? 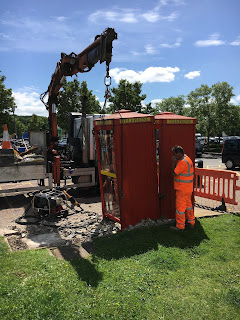 My wife and I had a 25 year renewal of vows this weekend (I don't blog everything, any family wanting to see the pictures, just ask).

On Saturday night the family had the lodge at Peckforton Castle, and Sunday morning the girls were there getting ready. The whole area has really poor mobile signal, even outside, and the lodge had no wifi! It was meant to have wifi but something was not right (and no, I could not fix it).

This was something of an inconvenience. We had people arriving on the Saturday night to other hotels and people arriving all Sunday, and we were trying to keep in touch, check when people were arriving, try and get a message to someone to get some cufflinks as James forgot them, and so on. A total lack of any workable Internet was a pain. Even when I went up to the castle when the bride got ready I had no communications with the family in the lodge. 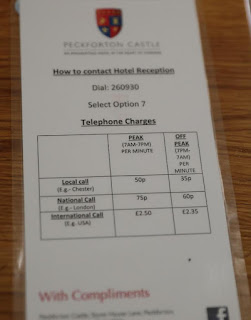 It was only when I considered writing this blog post this morning it dawned on me. There was a phone in the lodge. I just had not really occurred to any of us to use it to contact people!

To be fair, most of the communications did not want to be the type of interruption of a phone call, they suited a message which could be read later.

But this really does show how massively times have changed in just a few years. It has not been long since a time when there were no text messages or even mobile phones in popular use. Just a generation ago the phone in the lodge would have been the only communication one would expect to be able to use.

Clearly the land line is on the way out, replaced by mobiles and non voice communications.
Posted by RevK at 08:21:00