I have had this TV for over two years now, and overall I have to say I am pleased with it. It seemed like an appropriate time to say a bit more about it, as I am again changing my TV?

The reason for changing is simple. I returned from a short holiday last week (snowed in, at a cottage in the Peak District National Park, coding with two of my friends, so odd meaning of "holiday" in some ways, was fun though). Anyway, on return I found this (long scratch is around 90mm high). 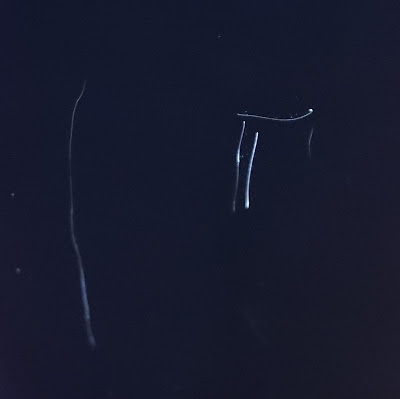 This is two of several large scratches on the TV, some really long, and I am sorry to say that seeing these, even if mostly only visible when black, would drive me nuts. I took care of my TV. Sadly we will probably never know what happened as too many people in the house over the week, and I need to just move on.

However, this does allow me to confirm two important points about the LG curved TV. The first is that you can easily scratch the surface. I think it is some sort of plastic.

Sadly, I also can confirm a second point, you cannot really polish out the scratch. If you try, you polish off the anti-glare coating. I pretty much expected that, but given the scratches basically ruined the TV already I figured it was worth a try.

It is really hard to photograph a shiny spot. Viewed with the right background at the right angle, or in a dark room, it does not show. But sadly this too would drive me round the bend. You can see here in her hair... 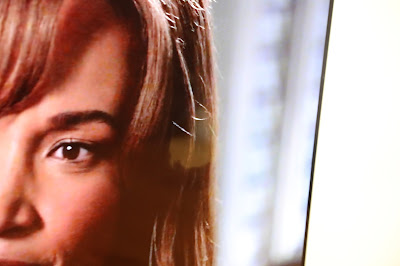 So, you have to be very careful with your curved LG TV basically - carefully dust and follow the instructions to not use solvents, etc. Avoid anyone touching it as it takes finger prints very easily, which means keeping well out of reach of small children.

But apart from these warnings - what is my view after 2 years?

I used some of the smart TV features!

I am slightly surprised that I used the smart TV features, but I did. I used iPlayer (to watch Dr Who) and used the inbuilt Netflix especially when they launched 4k content. Very impressive.

I have not used anything else really. One app on my phone was able to stream direct to the TV, but that was not necessary as I have an AppleTV which I can stream to from my phone.

I did not use the tuner!

I have simply not been watching broadcast TV. I do have a SkyQ box but I don't think I have used that for a year. I am pretty much embracing the streaming generation using either Netflix on the TV or the AppleTV. This does mean moving the TV meant I did not need coax points, only power and network.

When I got the TV, 4k content was hard to come by. I first found some on Netflix using the inbuilt Netflix app. I now have a 4k AppleTV. This means I am watching 4k routinely for any new content that is available in 4k. New films are, and so are new series on Netflix for example. It is impressive.

I have used HDR.

The HDR is one of those things that I have not noticed apart from when the TV tells me it is HDR. The 4k I can see, though that is partly because anything filmed in 4k is filmed on much newer and better kit rather than being able to see the pixels as much in all cases. But I have not really noticed things in HDR.

I used the 3D but very little.

I did not use it much basically because of lack of 3D content. Sky dropped it eventually. But it was also used by my son for games, two players seeing different views (2D) on the same screen at the same time.

I got a good quality LG sound bar at the same time - the TV sounds good.

The curve is fine

To really work out if the curve matters, I just need to now use a flat TV more. The curve has no negative impact as far as I can see, and I think meant reflections were less of an issue. It is perhaps a bit of a gimmick which is probably why it seems to have been dropped.

I am clearly spoiled...

What was interesting was the week away. They had a TV in the cottage, no sound bar. It was not OLED. To be honest I am not sure what TV it was - reasonably modern - my mates say it was a big / good TV. I could see the black was not black. I could hear the sound was not very good. It seemed small, and it was only HD :-)

I had not quite appreciated how good the LG TV actually was.