Recording multiple cameras on a Mac

I wanted to know how to do this, and as usual, with anything video related, all I found were youtube videos. Some times I'd just like to know then answer without watching a video. So this is my effort to explain in simple text.

The scenario is simple. I have two studio monitors, which include camera and mic. I wanted to record on both cameras at once so I could cut from one to the other (see example video here). This was basically an "interview with myself" video. Obviously this could just as easily be multiple web cams. Computer performance is also a concern, and more so if 4k recording. 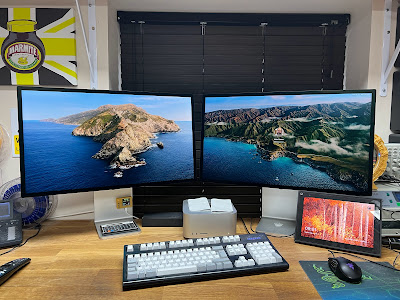 But there is a simple answer: The trick, which I was dead impressed with from this video, was you duplicate your Quicktime Player application. Literally select it in the Applications folder in finder, and select duplicate. You can then run two separate instances of it at once, and set each to record separate camera/mic, start both, and sorted.

Saving both files, you can then load them in to Final Cut and make a multi-cam clip synchronised by mic, edit views, and bingo. And obviously you could put a bit more effort in to is that my example video, but it shows the principle.