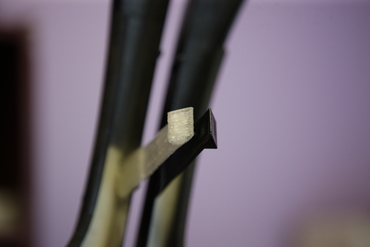 There are two materials I can use to print with the 3D printer. ABS and PLA.

ABS I can extrude around 220C and is quite good for stopping and starting. You pretty much have to have a heat bed at 115C and a fan, and lots of crossed fingers and virgins to sacrifice... But yes, it is either extruding or not. This is good. The downside is that it contracts as it cools and is a bugger to stick down the first layer. I have, for now, given up on ABS.

PLA is different! It extrudes around 195C nicely. It is very stable in that it does not contract much, if at all, which makes for things that stay put and and print neatly. The down side is it is sticky and stringy and oozy. When you try and stop extruding it sort of carries on a bit and makes thing bits of string. It is odd stuff. So neat, but with extra bits of string. It sticks down well on a hot bed at as low as 50C and stays put well for a whole print. It is more brittle and less flexible than ABS. It is pretty solid though, and apparently bio-degradable?!

The good news is I made my first "thing"! 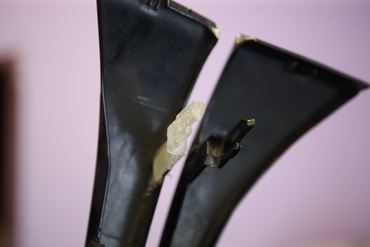 James's car (BWM) has a bit above the bumper that has clips to hold it in place. The whole thing is a complex moulded plastic arrangement. He has broken off some of the clips. I have made two replacement plastic clips. One of which was stupidly complex. But WTF! They work. One did involve printing in mid air which meant inserting some paper on which to print at the key point, twice, in the print, to hold up the extra bit until it set.

Now I am making a bracket to hold the new fan that is in the machine.

But yes, PLA works, it lets me print stuff, and it comes out as I designed. Yay!

Well, actually, turns out everything is mirror image due to some s/w bug, but that is easy to work around for now...