Special nutters even in 1st class

Walk in to 1st class on the train, sit down at table, get laptop out.

Someone else in carriage, well, only person, right at end of train. She gets up and asks "are you going to be using microwave technology?". Err, what? "Well like mobile phones or wifi - I am electro sensitive".

So I explain that there are mobile base stations all along the route and they will constantly pumping out a lot more RF than I could, so you will have a problem then!

She gets some sort of meter out and starts on about 15V/m or some such and insists she knows what she is talking about. This is while I am not in a call and not transferring any data, I might add.

I open laptop, she leaves, clearly unhappy. I am, however, a tad speechless. I was not prepared for that. Had I known a nutter was on the train with an RF meter I'd have brought my spectrum analyser with me.

I bet she was only in 1st class to be at the far end of the train, i.e. right next to the driver with his mobile phone, but she can't see him so that probably does not count.

I am surprised they let them out in public!

Update: I have to add some extra strangeness to this post, having never met or heard of such nutters before, turns out that Alex was given a card last night (left under his wiper). 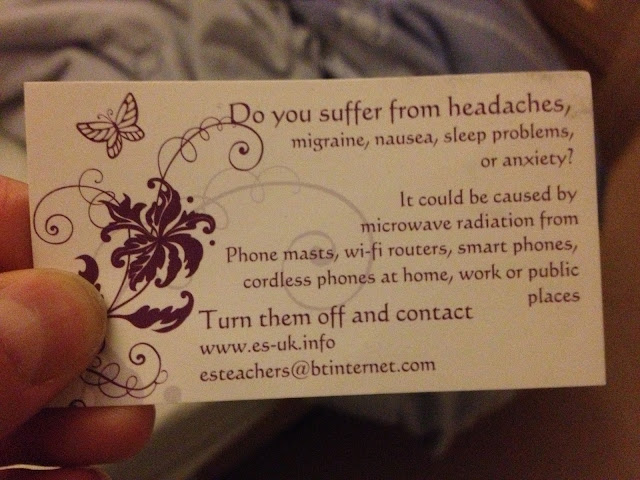 What is the betting they sell expensive RF meters.

P.S. Obviously the irony of "turn off all those things that let you get to web sites and email and contact us, err, via, err, web site or email" is not lost on me, nor the stupidity of a proper(ish) domain and then an email that is not under that domain but tied to an ISP. I also like the idea of turning off phone masts! They clearly lack clue.

Update: The train filled up rather at Didcot Parkway, lots of people with phones, so she stormed back in to 1st class, sat as far from me as possible, and proceeded to cover herself completely in a white cloth. She is clearly even more special than I thought. I hope my camera did not steal her soul. 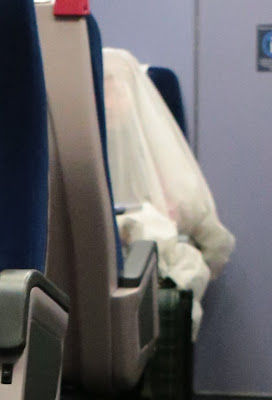