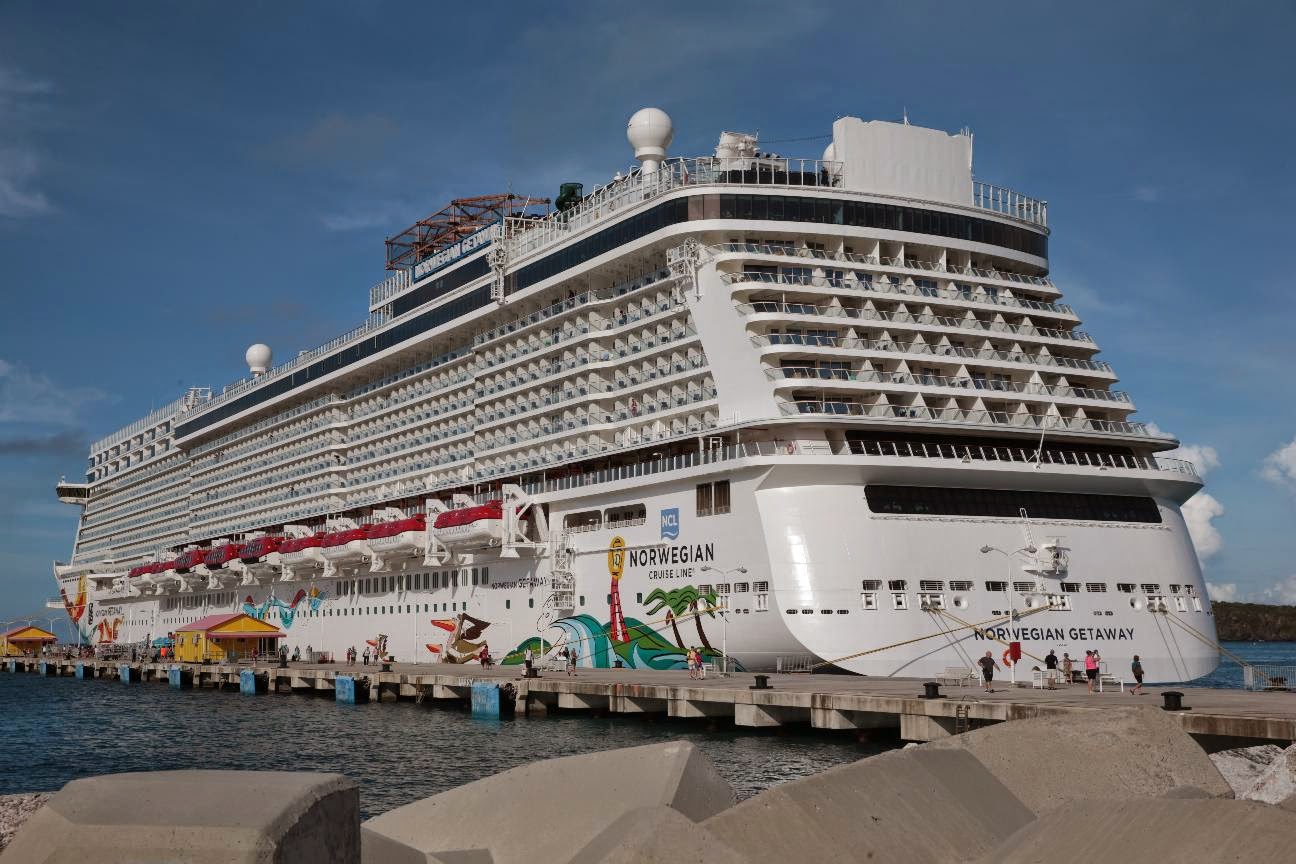 As I have posted a few times on the technicalities of Internet access from a ship, I thought it would be worth posting about the actual cruise holiday itself, if you have never been on a cruise this should give you some idea what to expect, although different cruise lines do work some things a little differently.

In our case, it was myself, my wife, and my sister-in-law for a one week cruise of the East Caribbean on Norwegian Cruise Lines flagship The Getaway. 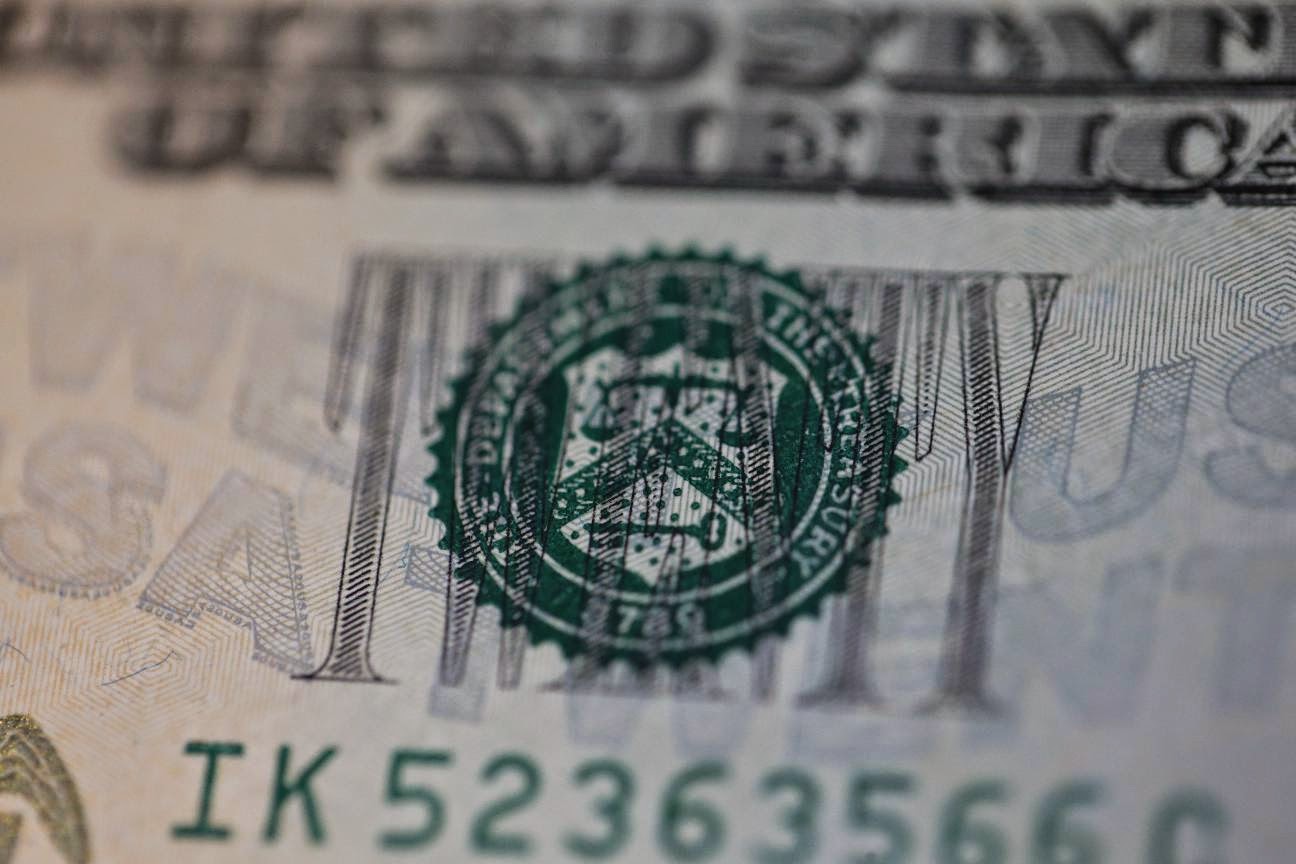 You can look up the actual cost on the cruise line web sites. Overall I was actually surprised how reasonable the cruise itself was. In general it is less than a hotel room. Of course that depends on the hotel, and the cruise has a similar range of cabins available. The problem is that the cruise (in this case) was from Miami and that meant getting to the ship and getting home again afterwards. The flights were half the overall cost. In our case we upgraded to premium economy which added a lot to the cost. 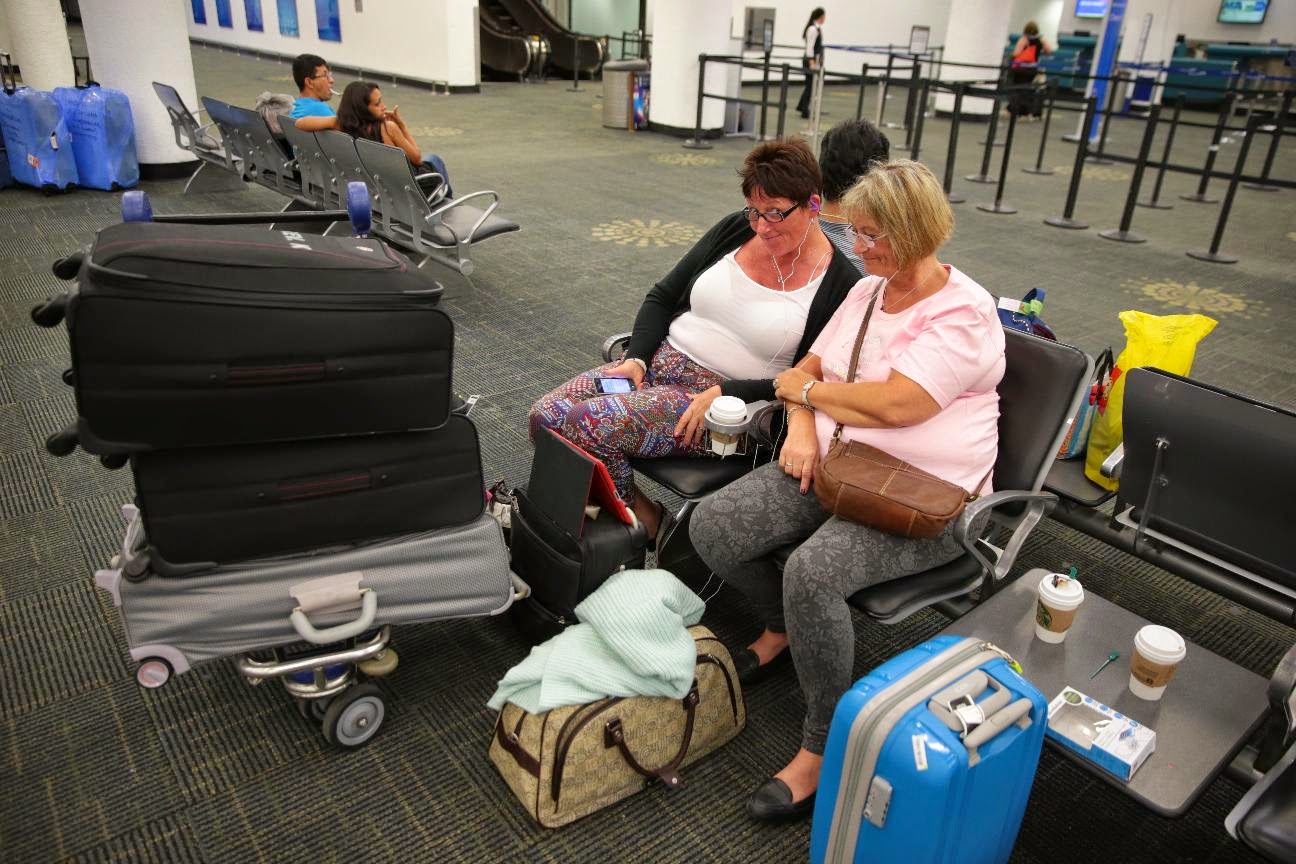 Whilst a cruise itself is travel, that aspect is more of a floating hotel. The travel aspect, as well as taking up half the cost, is a significant amount of the overall time and is all hassle.

Part of the issue with time and hassle is that NCL arrange Virgin flights. In hindsight we should have sorted flights separately, and it looks like BA do Miami earlier in the day. In the case of Virgin, we had to fly out on the Friday and stay over night in Miami. That added a day. Miami is hot, humid and damp as you may expect, and the hotel was a very mediocre Sofitel. It was a tiring day, made massively worse by a fire alarm and evacuation at 4am. It was a false alarm, but even after being let back in the alarm kept sounding due to a fault so no chance of getting back to sleep. We then had a coach to the port at lunch time.

Coming back, after the cruise, the later flight times of Virgin meant another very tedious day. We did a sightseeing tour of the city which we were able to book on the ship, but even so we spent 8 hours in Miami International Airport, which is not a very nice airport, before another 9 hour flight home. This was made worse by the fact Virgin check in staff lied to me, offering an exit row seat for extra leg room which turned out to be a bulkhead seat with bugger all leg room. Not impressed.

The last night was slight extra hassle as luggage is put outside the cabin at night, so you end up packing most stuff but with tooth brush and stuff you need for morning in hand luggage that you then have to mess about transferring to main luggage before getting the plane. In my case I only had my camera bag, and it also meant carrying my pillow as I was not packing that the night before!

Obviously you try and put the hassle, discomfort, and cost of nearly three days messing about out of your mind.

It really is a floating hotel with about 3000 guests on board. Very impressive. On arrival at the dock people take your luggage away, and you queue up. In our case we were escorted to front of the queue and then to our cabin. The cabins are all called "staterooms". This was because we had booked an expensive two room cabin so my sister-in-law had her own room. The luggage then turns up a bit later outside your door.

The cabin itself was very good. It was about twice as wide as most, with a main living room and big TV with balcony. It had the small bedroom and en suite shower and toilet, and separately a large bedroom with proper bathroom with both bath and shower. We had a butler! We took breakfast in the room which was no extra cost. We had access to the Haven area which is a separate bar, restaurant, pool area, and sun deck. Oddly the sun deck appeared to be all gay couples (not an issue, just surprising). I gather there are sometimes group bookings arranged for various groups of people, but no idea if this was such or just a coincidence.

Things were not without issue - the TV stopped working twice, and the door to the main bedroom broke. They had three of them, with ladders and dismantling the wall and stuff for two hours to fix the door, then had to come back next day as still not right. Even so, they were quick to sort any issues. 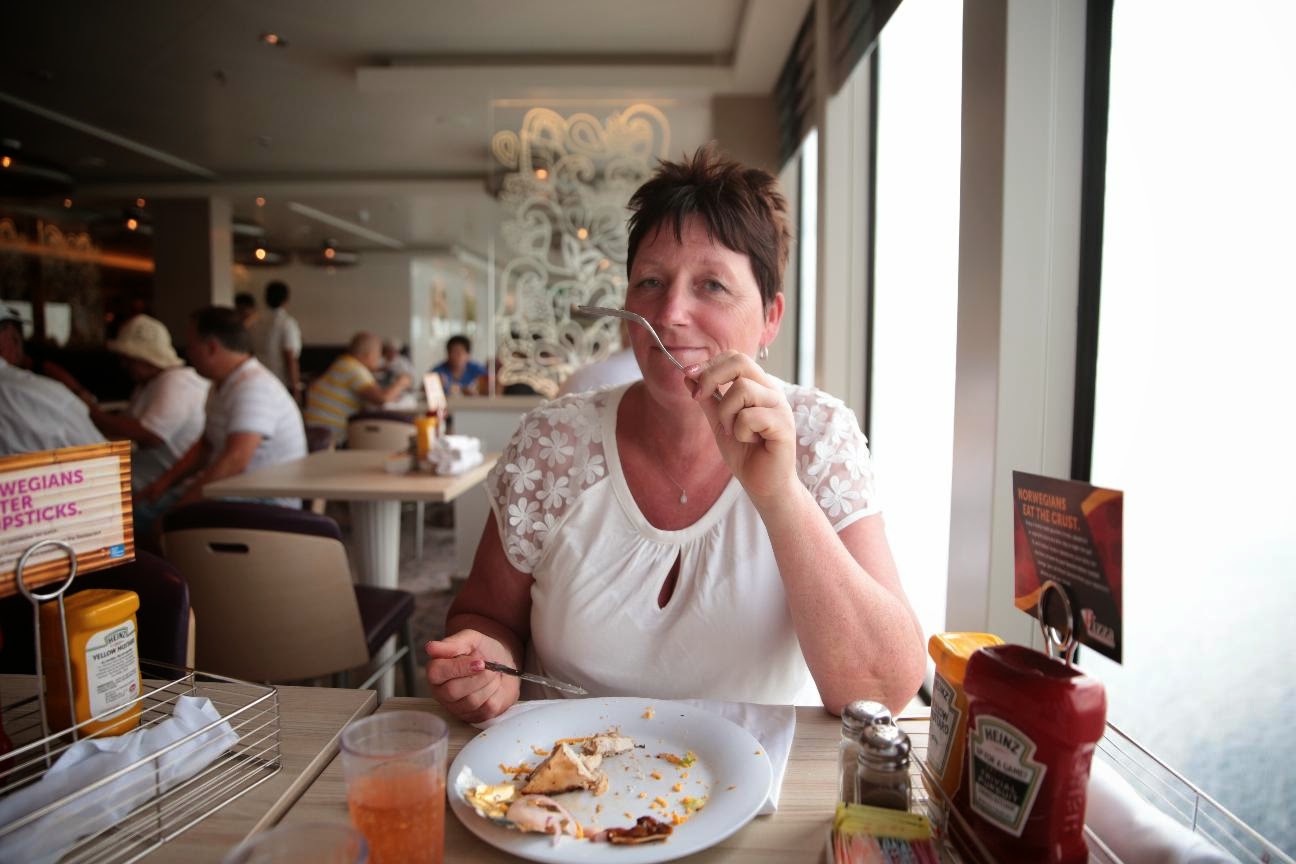 The cost included the main restaurants, which in our case included The Haven Restaurant, but there we several others on the ship including a very large buffet style.

There are also a number of specially restaurants that had a cover charge ranging from $15 upwards, but then everything on the menu was included for that. I was surprised that they did not have a Chinese or Indian though.

However, alcoholic drinks were not included. If you brought alcohol on, it was taken away until the end of the trip. On top of that, the drinks all had an auto gratuity. I did not argue the toss on that, but it was tempting as the ticket is meant to include gratuities. They even have space to add an extra gratuity! I had the chance to try a number of interesting cocktails.

Specialty restaurants needed to be booked in advance, and by the end of the trip they were fully booked, so plan ahead. 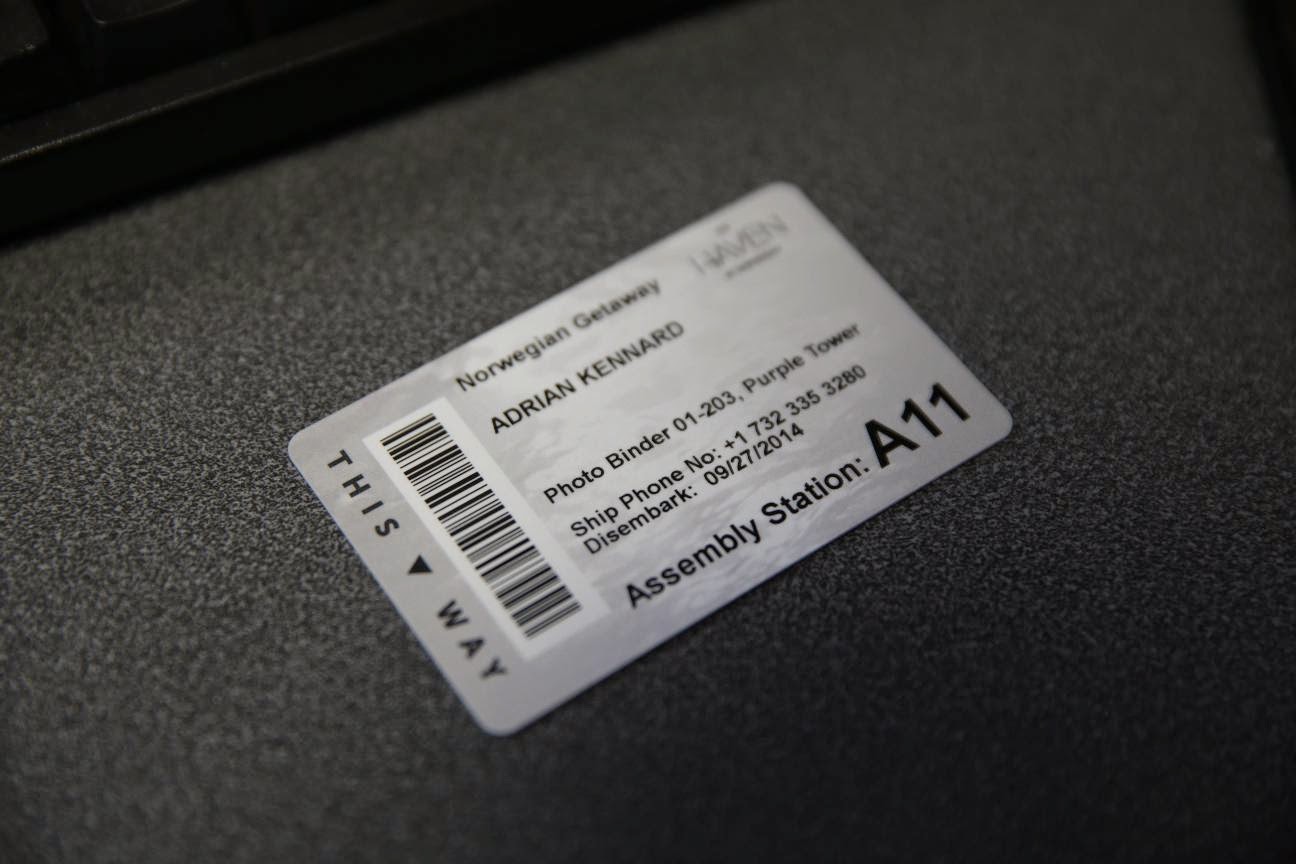 A key card is issued when you board, and you take it everywhere. You can pay for drinks and buy things using it. You do not need cash - everything is on the key card. You have to sign for everything, which is good. In my case the three cards were all billed to me, but it looks like they could have done it individually. At the end of the trip we had racked up over $1000 which they charge to a credit card. They really make it easy to buy extras, including a blue diamond gold ring! The TV (or iPhone app) shows the statement as you go, which handy. FYI, the app is why iMessage works, as, Apple being a closed environment, the only way for the app to do incoming calls and texts is via office Apple push notifications, and that is all tied in with iMessage, LOL.

You obviously need the card to open your cabin, but also when leaving and boarding the ship at the stops.

Even so, it would be perfectly possible to have a trip with no extra costs, and still eat well.

I started with a cold. I went down to medical area and asked about decongestants. Yes, they could sort me out, but I would have to see and doctor and that was $105 and medication was charged extra on top. So I checked out the gift shop which had a very small selection of medications. I put up with it, having brought paracetamol with me.

However, cruise ships are a tad paranoid over hygiene! It makes sense, cramming so many people in to a small space. Dispensers for alcohol hand rub are everywhere, along with people to encourage you strongly to use it. On getting back to the ship they spray your hands as you arrive. As I say, good idea, but feels over the top even for someone that tries to keep clean hands and consider hygiene anyway.

There are ship's photographers everywhere. They had the camera wired up to a small tablet and they would key your cabin number on them. I hear on some ships they use face recognition instead. Anyway, you can review the pics on various displays and the photo shop, and buy them if you want. Yet another way to pull you in to spending more. We did not do that, and took our own pics :-) 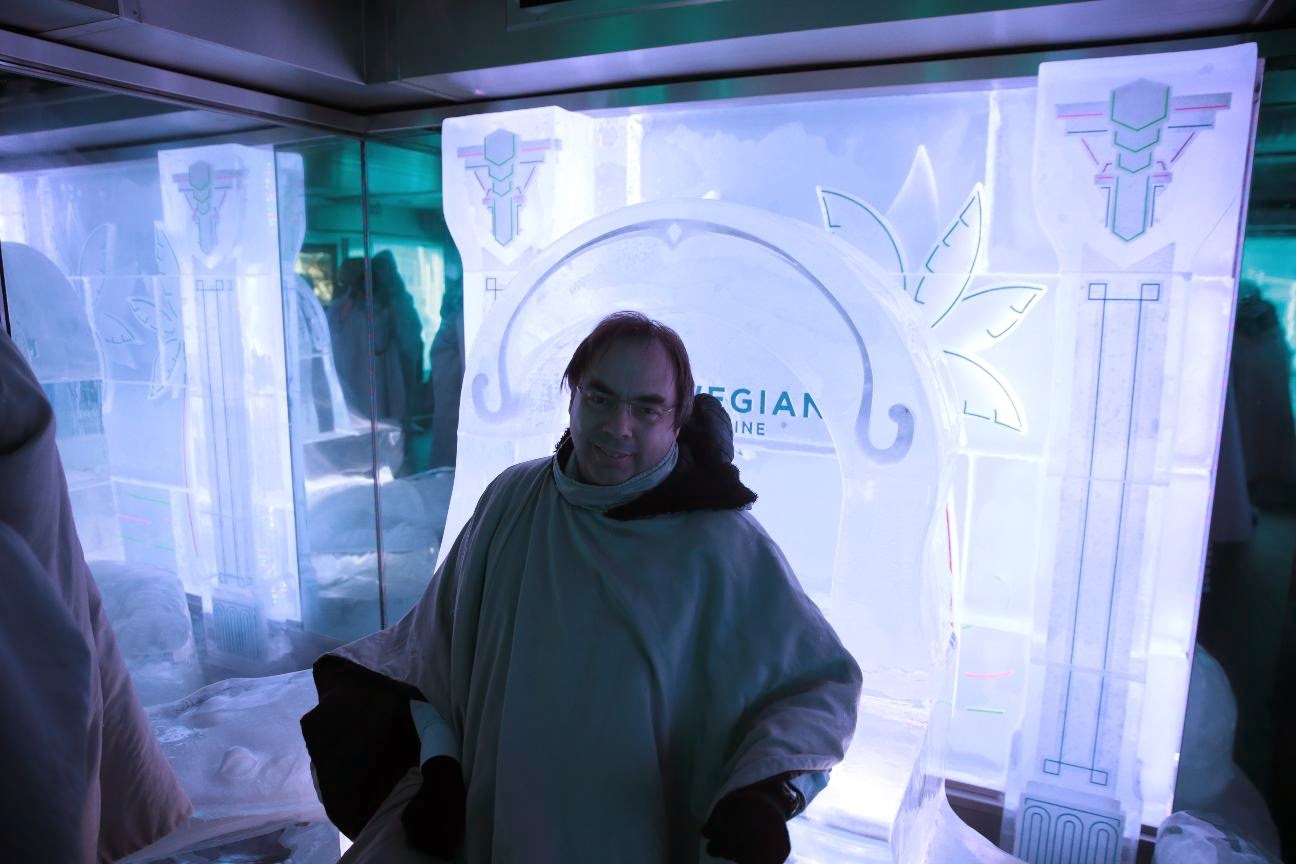 There were loads of shows and events. We saw a performance on Legally Blond, as well as a Comedy Club, and a magic show. All quite good.

The shows need to be booked in advance, even though most are no extra cost. Indeed, if you don't attend they can charge.

There was even an art gallery and auctions, which they seemed to keep inviting us along to with small presentations with sparkling wine, probably because we had a posh cabin. We even had VIP cocktails with the captain and crew (and the rest of Haven).

The ice bar was disappointing because it was so small. You would expect some ice sculptures maybe, but just a chair to sit on. It ended up being too cold even with the coat they provide. Yes, I know, I am not one to complain of the cold! 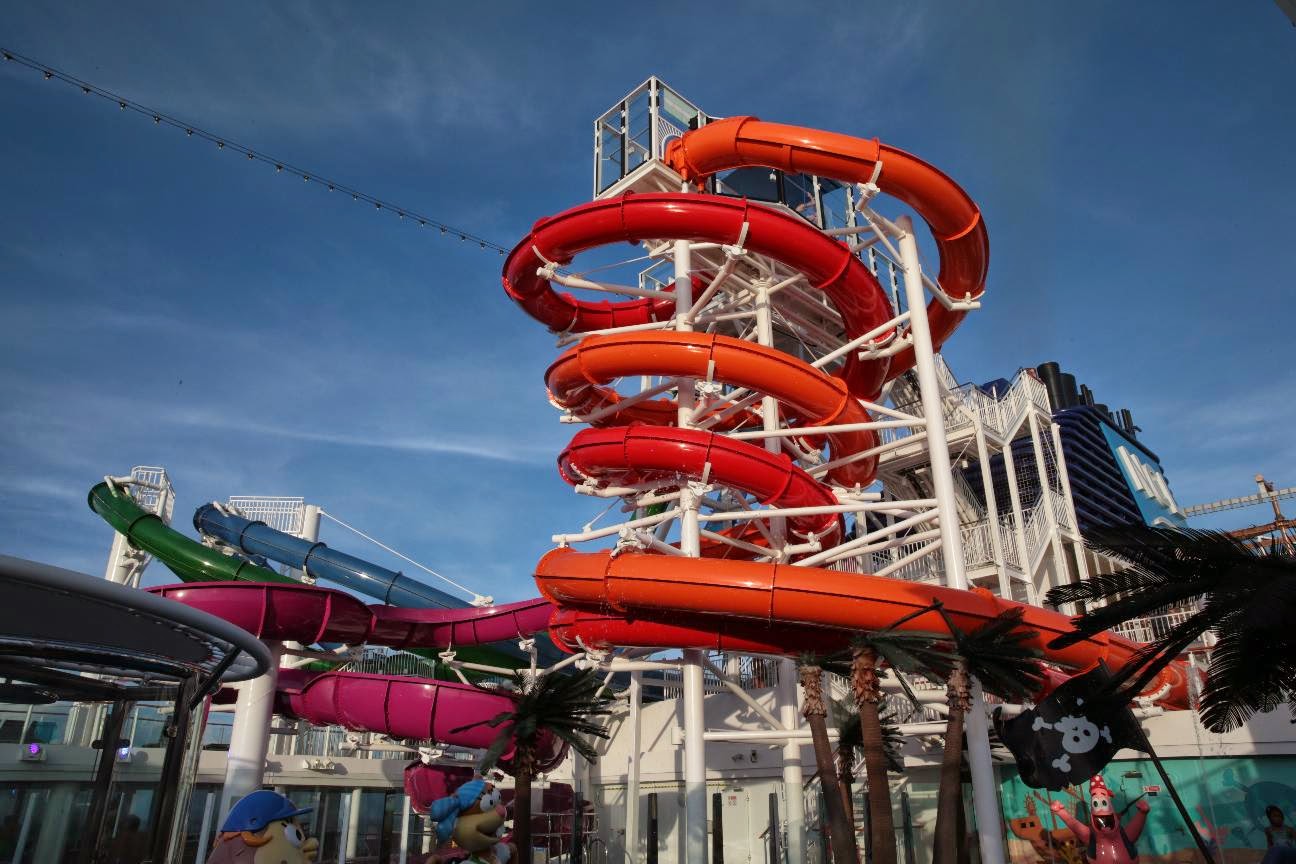 There are a lot of activities including water slides and rock climbing. To be honest we did not go in for them. We did go out on to the Sponge Bob deck to see what it was like. It was was packed and looked very Bultins. Mostly the girls sun bathed on the Gay Deck where they met some interesting people. I mostly watched TV, went to the bar, or tried to get the Internet working on the sat phone. 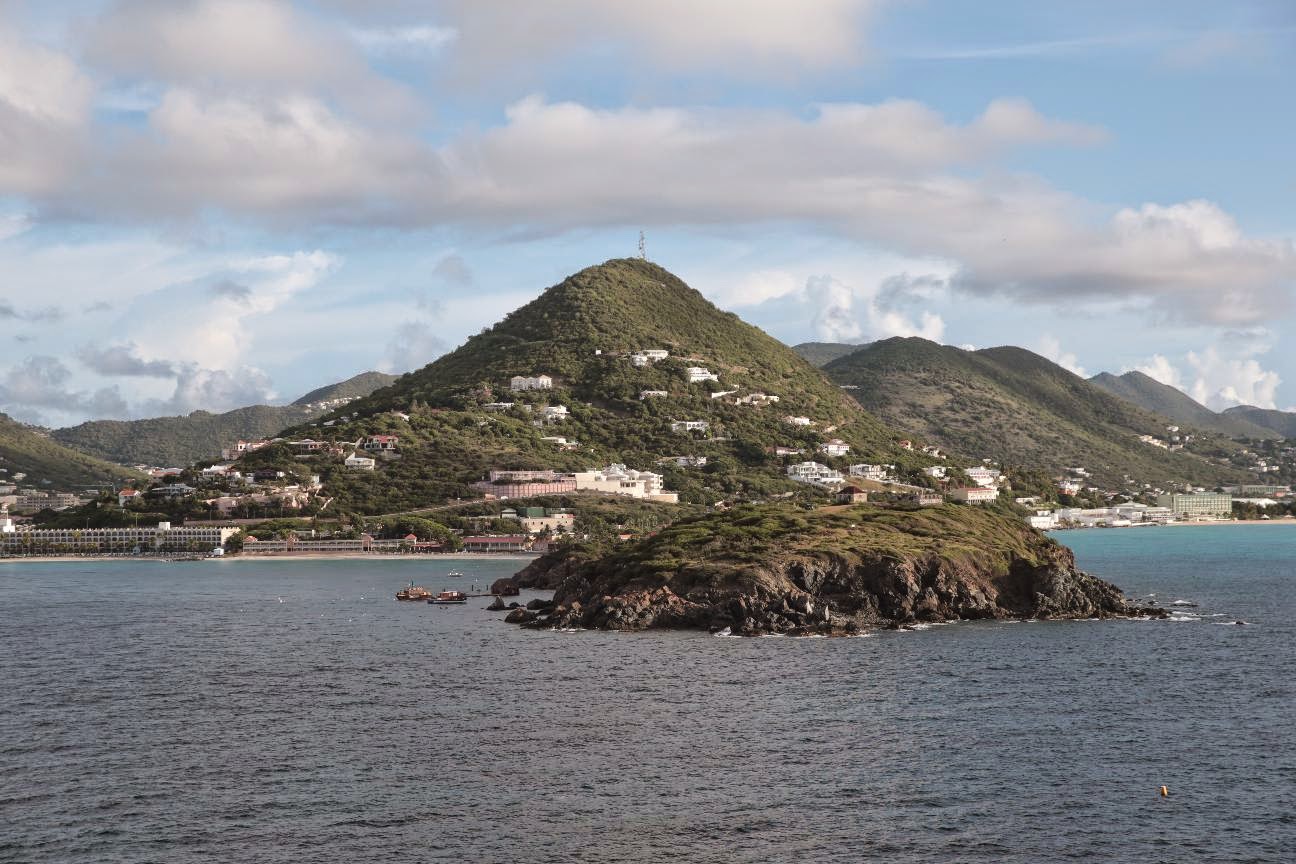 Of course, part of the point is to visit some islands. This trip of a week involved three stops. You dock in the morning, and there is a time you have to be back in the afternoon. They have loads of activities and tours you can book while on the ship.

We went for a wander and some shopping on St Maarten. We did an island tour on St Thomas. We went to a market and a few shops on Nassau.

However, in all of these places, and indeed on the ship, and pretty much everywhere around the Caribbean, you get jewellery shops. Loads of places selling diamonds, and some selling emeralds and so on. You end up under a lot of pressure to buy your wife something shiny. 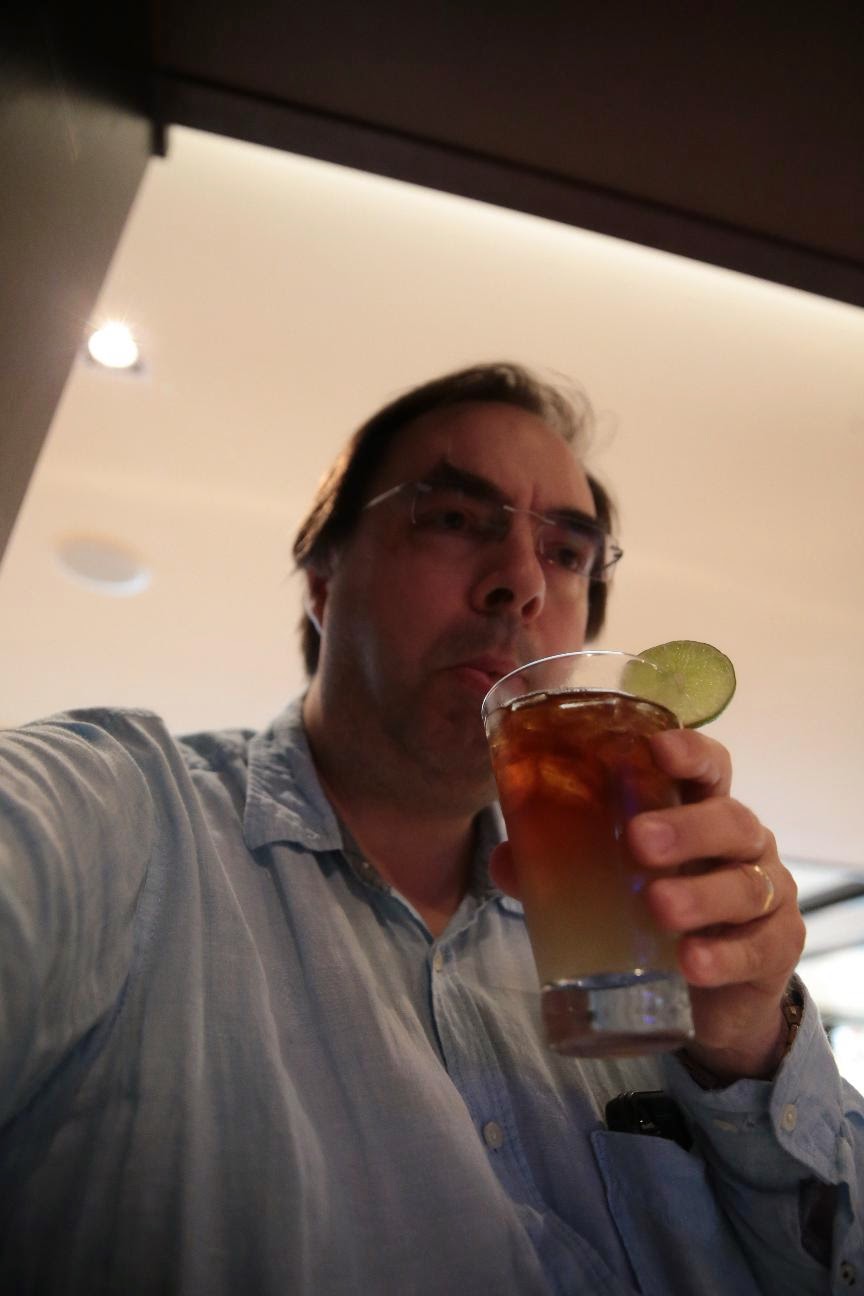 It was an experience. It was a bit more that just staying in a nice hotel for a week. The islands, and the fact that there are loads of things on the ship (and a big choice of food) was better than just staying in a hotel. Overall it made a nice break, and the girls liked it a lot. The traveling to and from the ship really does dilute it though. If I lived near a port it would be a no brainier to take a cruise. But yes, it was fun. 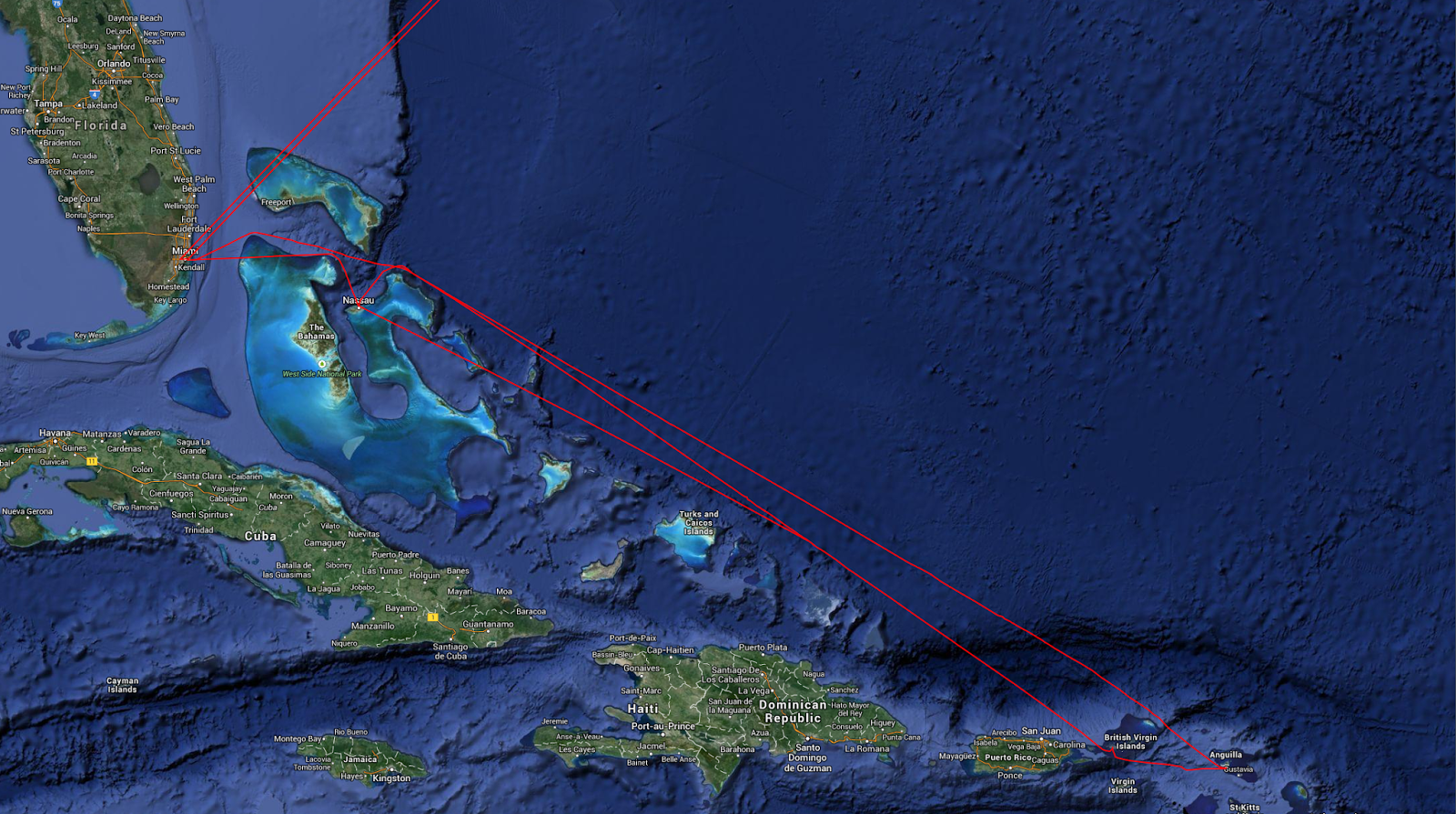