Is this why we need to spy on every citizen on everything they do in their home all the time? #IPBill 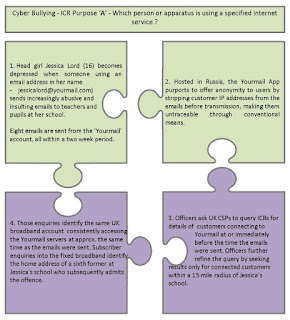 This is one of the examples from the National Crime Agency as to why we need the IPBill and automated filters to search a huge distributed database of everything everyone does on-line in the UK.

This really does show how invasive this will be if allowed to continue in to law. It is quite shocking. This is police state gone mad.

There are so many things one could say about this terrible example, I don't know where to begin. But here are just a few of the issues.


I am just shocked that they do not see this as an example of how invasive and police state this example shows the IP Bill to be... Shocked!

P.S. Look how easy such a system is for tracking the confidential source for a journalist, or such like. All without a warrant even!

The police would have the name of the service used. The CSPs would have the IP addresses of the TCP connections made - they would not have the name. (Yes, https can expose the certificate name using DPI at present, but that will change soon).

So, the query needs to state IP addresses to be checked, not a service name or domain name.

I see nothing in the IP Bill providing for a system to track the IP addresses used by every domain name in the world in real time as they change. Indeed, I am not sure such a system is technically possible. It would also have to track the "view" from each ISP at the very least as DNS servers can (and do) give different answers depending on who is asking. Such a system would be a really huge project, but without it, the police would have no way to know what IPs to ask the CSPs for in their search as they would have no way to know what IP was in DNS two weeks ago!
Posted by RevK at 09:40:00