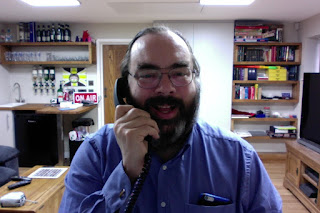 I want to set the record straight here.

When I made a blog post on the 17th March (here) I honestly thought the unlawful junk call I had received had been made by Verso Group (UK) Ltd. I am TPS registered and this was a marketing call, so unlawful.

You can see how I might have jumped to that conclusion:
It was an easy, and honest, mistake to make, as you can see.


It seems that I was wrong!

Someone has called today apparently from Verso Group (UK) Ltd, and stated in no uncertain terms that "We've actually never dialled him", and "the recording he's posted has nothing to do with our business", and "it wasn't a call that was made by our company".

I do sincerely apologise for making this assumption.

I appreciate that it can be frustrating when this sort of thing happens - we have had A&A customers get pop-ups claiming to be a survey by A&A and then being a scam, and they too are nothing to do with us.

I am really struggling why someone would impersonate Verso Group (UK) Ltd, and to what end, but that is what they are suggesting has happened. You have my sympathies, Verso Group (UK) Ltd. Clearly you are not the sort of company that would flout rules on calling people on the TPS, or laws on company names on web sites and emails, or any of those things, oh, wait... No, really, it was not you calling, obviously.

The good news is that, now that we know the call was definitely not made by Verso Group (UK) Ltd, it is clear that there can be no issue with my posting the recording - here it is again for you to listen to. Remember, it is apparently not actually Verso Group (UK) Ltd making the call, so no matter how daft they sound, you should not form any bad opinion about Verso Group (UK) Ltd when listening to it. Even so, it does not even appear to be defamatory of Verso Group (UK) Ltd in its content from what I can hear - it is the exact business they are in - lead generation, and exactly the sort of call people report as having received from them on various forums. I made it clear in the call that it was being recorded to post on Facebook (which that link is) and he said "yes" and continued with the call. Verso Group (UK) Ltd have no say over the call recording as it was not them making it, not that they had much anyway, but they can't claim the employee was not authorised to agree to publication as it was not their employee.  They cannot claim it is private or confidential as it was not them making the call. It may be useful evidence for them if they have an issue with people passing off as them and I am happy for them to use the recording for that purpose if they want to pursue legal action against the actual caller.

Anyway, now that is out of the way, it is interesting to report on some aspects of my day...

Last night A&A got an email, claiming to be from Verso Group (UK) Ltd,  threatening legal action, claiming that the recording is private and confidential and Verso Group UK Ltd do not give any permissions for the recording to be posted on a public domain. Well, permission was obtained in the call, listen. But this seems at odds with the claims today, apparently from Verso Group (UK) Ltd, that they never made the call. If they never made the call they cannot claim it is private or confidential to them! Maybe this email was also from an imposter! Or was it the calls today that were from an imposter. How could I know?

Today we got calls from someone claiming to be from Verso Group (UK) Ltd. Again, threatening legal action against A&A, saying "I'm going to come down to your office", suggesting that I am "hiding behind a social media page" and that he would "rather the guy had a bit of balls and contacted me". Oddly, calling back his office twice this afternoon he was in meetings or on a call and did not call back - maybe it is not his turn for the balls today? (I assume these are like executive stress balls or something).

With both written and verbal legal threats against A&A, we had our solicitor on site all day as he said "I'm going to come down to your office" after his 10:30 meeting. We waited, and waited. Solicitors are not cheap, so I hope he does not mind the the bill if this does go any further against A&A. Hopefully he'll consider the matter settled with the above apology. I wonder how many of the complaints on the various forums and even the Verso Group (UK) Ltd Facebook page are actually by imposters! What a terrible situation to be in.

As I own copyright in the recording I am saying now that people can copy and repost it as much as they like and laugh at the irony of a company (even if it was not in fact Verso Group (UK) Ltd) trying to sell me better broadband!!!
Posted by RevK at 18:38:00