Given OFCOMs idea that one in ten lines are faulty it may help to provide a concrete example of the problem here and explain quite how daft this really is. For example, it is not, as some may assume, the slowest 10% of lines in the country.

The 10th percentile is for "similar lines" and so BT will have banded lines that are that close together and sampled them and looked at the range of speeds that such lines can get so as to find 10th, 20th and 80th percentile. This means some aggregation. I don't know for sure but this could a band of line lengths 0-500m from cabinet. BT will have done some level of aggregation - we may even be able to find what, but it does not matter for this explanation, so we'll assume 500m line length bands for now.

The 10th percentile is 74Mb/s. This means that lines in that "band", i.e. "similar" lines sync are a range of speeds from below 74Mb/s up to 80Mb/s. Indeed, many would probably sync well above 80Mb/s if the sync was not capped.

One in ten of these lines will get below 74Mb/s - that is the very definition of "10th percentile". Whilst the occasional line will actually have a fault (less likely on such short lines) and still sync at a lower speed, the main reason for being below 74Mb/s will be the line length from the cabinet.

So, assuming this is, say, a 0-500m band it could simply be that everyone over 450m from the cabinet gets less than 74Mb/s, a simple fact that they are a certain line length away. Not something anyone can change.

Now, let's look at their neighbour, who is, say 510m away. They may find they are in a 500m-1km band, and get lumped in with such lines for their forecasts. Being so close to the top end they may be in the top 10th percentile, even though they sync at a lower speed, say 70Mb/s. So their line is not deemed to be "faulty". Indeed, they could find themselves with a 50Mb/s guaranteed minimum, have an actual fault on their line dropping it to 51Mb/s and not be caught by the code of practice.

Please explain to me how this mad system where arbitrary bands of one in ten people at various line lengths (depending on arbitrary choices of "similar" line groupings BT do) are to be deemed to be faulty is meant to actually help consumers? It is not like these people are more or less likely to have a fault, or that they are good candidates for some changes in technology so as to improve speed, or even that they have "slow" lines, they are simply "one in ten".

A graph may help explain... 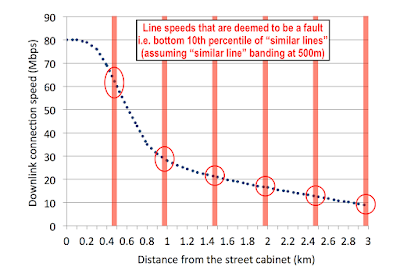