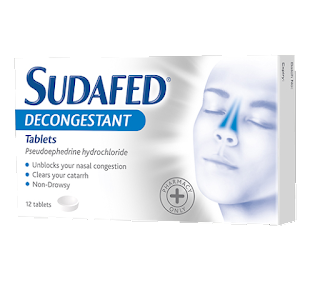 One of the nice things about the people that read my blog is that I get some expert opinions on all sorts of matters in the comments, and this may be one where legal, pharmaceutical or medical opinion may abound. So bring it on...

Sudafed is a brand of decongestant and one of them is Pseudoephedrine hydrochloride. It works well as a decongestant.

But buying this stuff can be an issue. They make a lesser decongestant which, to be frank, does not work (for me).

My understanding is that the big issue is that this stuff can be used as the basis for some nasty drugs. Yes, I have seen Breaking Bad. I once tried to buy some when in the US and you would not believe the hassle - passport needed, and even then I think they managed to break their own rules allowing a non US / non Canadian to buy the stuff.

It is over the counter, so a serious medication. But to be frank, when I have a nasty cold, this is what does the trick to clear my head and my chest and sort it out. The other stuff they do just gives me a headache. This works well. As I understand it, there is a possible side effect of increasing blood pressure, so one to watch out for if you are hypertensive. I am, but never have had an issue with this stuff, and I do check.

My problem here is that last year, over the end of the year, I had a really bad cold. It literally lasted for months and I managed to crack my ribs coughing so badly at one point. Yes, I went to the doctors, and they could do nothing and confirmed that lots of people had a really bad cold for months. It was not some silly "man flu", and a lot of the time I was in bed. This was really very unpleasant and lasted for months.

During this I was, at various points, taking maximum doses of paracetamol, ibuprofen and sudafed for several weeks at a time. I take the instructions seriously, and do not take more than allowed. Indeed, I tend to try and take less than maximum dose if I can. But I had a cold for MONTHS, and so did get through a few packs of decongestants.

Oddly, since then, I have had more sniffles and colds than usual. My doctor is not concerned. I get another full check up in a few months anyway. They are also not concerned if I occasionally do take sudafed for a cold. It works. They do ask that I check my blood pressure, that is all. I do that.

The problem is the pharmacist in Tesco in Warfield. She decided I was taking too much! Initially just a query, then an outright refusal to ever sell me it on the basis that I was on blood pressure meds. Well, reading the advice on this you should check with your doctor, which I have done, but no, she simply will not sell me any. Oddly, she will not sell my wife any either on the basis she is on blood pressure meds, when, in fact, she is not!!!

So is this for my health? If it is, I am sure the doctor would say. I do not buy this a lot. Well, I did not, until the day I was banned!!!

Now, what do I do - well what any sane person would do, I stockpile it!

So by banning me, I actually have loads on hand as every other pharmacy, even boots on-line, is more than happy to sell it, so now I am tempted to take a tablet at the slightest sniffle or congestion. To be flank, I am not, as I would rather not take any medication unnecessarily. But banning me has had the opposite effect on availability for me. So why do it?

Why ban me from a medication that the doctor's surgery are happy I take occasionally if I need it? Why create a situation where I end up stockpiling it just in case and so am MORE tempted to take it than I would be otherwise? How stupid is that?

Oh well, this is the same for many systems of regulation and control - they can often create the opposite effect to what they intend...
at October 03, 2017