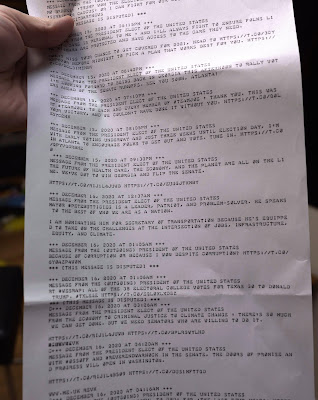 As usual , something silly and simple has turned in to many hours, and learning some lessons.

I made a Trump tweet machine that prints Trump's tweets on an ASR33 teletype. It was a fun use of the teletype as it only does ALL CAPS anyway, meaning Trump tweets were a perfect fit. It was also printing on the only paper I had which was a sort of tissue paper (so you could, in theory, wipe your arse with the tweets if you wanted to). I have some proper teletype paper rolls now.

The original version was very simplistic - it used IFTTT which can do something for a tweet by a person. It can send that via http, with the name, time, and tweet text. I printed that. It worked.

However, it was not perfect. The main issue is a hour or so lag with IFTTT. I decided I could do better.

The code is asrtweet.c on GitHub. It has had an annoying amount of tinkering to get it right. I suspect there will be more.

I decided to use twarc after a bit of googling. It seemed to be one of the few command line tools that would feed the raw JSON which Twitter provide. Handling JSON is easy, but it seems handling tweets has a lot of gotchas, and is not as obvious as it seems.

There was a lot to learn.

But the end result (so far) is code that runs twarc to filter follow one or more users, and pick tweets by them. Handles retweets and replies with an extra line of text printed. Handles wrapping to 72 characters. It is typically printing a Trump tweet within about 10 seconds of him tweeting. No more hour long lag.

It is rather surreal having a teletype (very noisy) suddenly wake up and print a message from the president of the united states in my study here.

Here's one which did not even need converting to upper case :-)